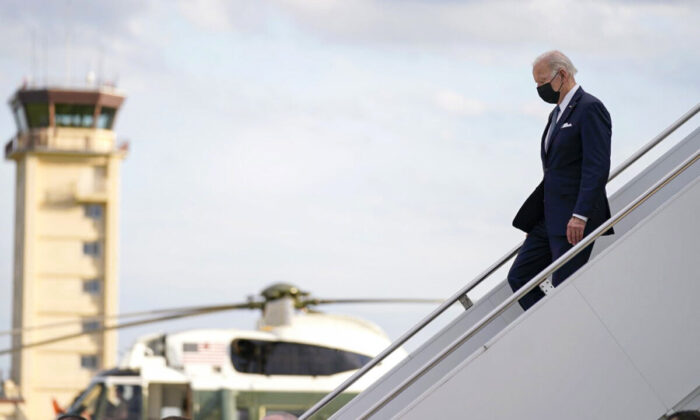 U.S. President Joe Biden disembarks from Air Force One on his arrival at Yokota Air Base, in Fussa, on the outskirt of Tokyo on May 22, 2022. (Evan Vucci/AP Photo)
Economy

Americans are increasingly pessimistic about the state of the economy and Joe Biden’s presidency, according to a CBS News poll from May 22, with 63 percent of respondents describing the state of the country as “uneasy” and “worrying.”

Inflation stands at a 40-year high and increasingly steep gas prices are stifling living standards for most Americans, with many blaming the White House for their woes.

Biden’s approval rating stands at 44 percent in the CBS poll, with 56 percent disapproving of his handling of the presidency.

Meanwhile, 65 percent of people polled said they felt Biden is “slow to react” when issues arise, and 69 percent said the economy is “bad”—up from 46 percent in the spring.

Nearly all surveyed from both major parties indicated that they want politicians to focus on inflation as their primary election issue this fall, amid rising dissatisfaction with the direction of the country.

A growing number of Americans are concerned about the price of goods and services, the economy, and the stock market, with many respondents becoming pessimistic about their future retirement plans.

Two-thirds of those who have money in the stock market are pessimistic about their investments.

Most respondents are less concerned with the CCP virus compared in contrast with the economy, and but they are more optimistic about the availability of local jobs.

Inflation hit the highest levels since 1982 when the consumer price index, a measure of changes in the average price of goods and services in the country, climbed to 8.5 percent in March and hovered at that level in April.

It has slightly dipped since the Federal Reserve increased interest rates in May by 50 basis points, with further hikes expected this year to combat rising inflation.

The central bank’s hike earlier this month was the largest increase since 2000.

Average national gas prices at the end of last week reached a record high of $4.59 for a gallon of gas, according to AAA.

During a May 23 joint press conference held in Tokyo, Japan, between President Biden and Prime Minister Fumio Kishida of Japan, Biden was asked about the financial pain Americans are feeling caused by rising gas prices.

“Here’s the situation. And when it comes to the gas prices, we’re going through an incredible transition that is taking place that, God willing, when it’s over, we’ll be stronger and the world will be stronger and less reliant on fossil fuels,” responded Biden, implying that his energy policies are directly related to the energy price increases.

Officials and lawmakers the previous day weighed in on the matter, with Republicans slamming the Biden administration for failing to respond to the worsening economic crisis.

“We have rising inflation. We have a baby formula crisis. We have a border that’s surging. We have a drug crisis. We have what’s happening in Ukraine. We have gas prices going through the roof,”  said RNC Chairwoman Ronna McDaniel, who predicted favorable results on Election Day because of the series of economic crises facing the Biden administration.

“When the dust settles, Republicans are going to unite, including President [Donald] Trump, to make sure that we win back the House and the Senate,” said McDaniel.

“The president is slow to react—whether it’s the border, whether it’s inflation, whether it’s gas prices—even Ukraine,” said Sen. Rick Scott of Florida on “Face the Nation” on CBS.

Scott believes that the administration’s responses regarding the economy and a host of other key issues will bolster voter turnout in favor of the GOP in November.

However, the CBS poll showed that Republicans in Congress do not appear to have much of an advantage on the issue of inflation.

GOP legislators are being blamed by many conservative voters for not doing enough to stop bills they say were filled with wasteful spending, a failure to stall the progressive agenda, and the neglect of key domestic issues.

When asked by Face the Nation host Margaret Brennan on what the GOP should do, Scott responded, “We’re going to balance the budget, we’re going to start watching the dollars very closely, we’re going to watch our spending, we’re going to expect the Federal Reserve to reduce their balance sheet. So, I think we have to talk about the things that we’re going to do to make it better for people.”

The Republican leadership is seizing upon inflation as a key campaign issue to target voters ahead of the midterms, but have yet to offer many details on how to combat the problem if they take Congress in November.

The administration’s official response from National Economic Council Director Brian Deese was that the White House would not rule out the risk of the country falling into a recession.

On CNN, Deese said he wouldn’t rule it out and that “there are always risks” of falling into a recession, explaining that the U.S. economy was in a “transition” period.

“Our economy is in a transition from what has been the strongest recovery in modern American history to what can be a period of more stable and resilient growth that works better for families,” Deese said.

“But there’s also no doubt that the United States is in a better position than any other major country around the world to address inflation without giving up all the economic gains that we’ve had and that’s because of the strength of our recovery,” he said.

Deese praised what he called the “strongest job market in modern history” on Fox News Sunday, saying that the president understands that “these prices create real hardship and they also create uncertainty.”

“We understand that. And that’s precisely what the president has made very clear that combating inflation is his top economic priority.”

Another ominous sign of economic instability appeared this month, when the three major U.S. market indexes tumbled to a new low on May 20, when the S&P 500, slid into bear market territory at the end of last week trading after seven straight weeks of decline.

However, U.S. stocks finished higher on May 23, ending the longest stretch of weekly losses for the Dow Jones Industrial Average since 1932, along with a dive by the S&P 500 into bear-market territory last week.