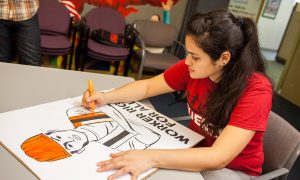 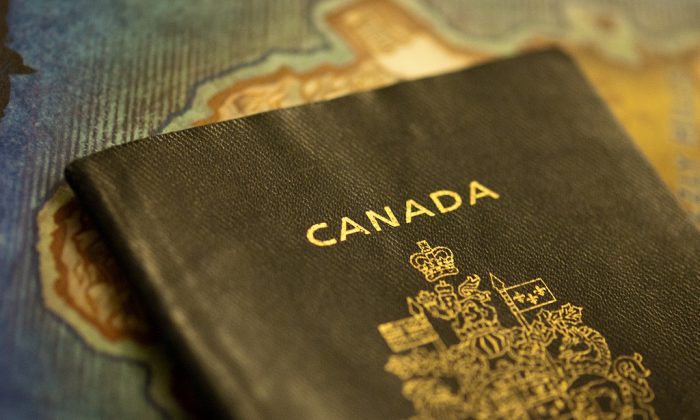 Americans Line Up to Renounce US Citizenship in Toronto

TORONTO—Patricia Moon still remembers the terror that sent her rushing to the U.S. consulate in Toronto to renounce her U.S. citizenship back in 2012.

That was when Moon discovered she could owe as much as $455,000 in taxes and fees. Like many other dual Canadian/U.S. citizens, she panicked.

“You can’t sleep, you can’t eat, and what everyone was doing was going to the computer because you were waiting for the word that the IRS was coming after us,” she said.

Moon wasn’t alone. A record number of 2,999 Americans renounced their citizenship in 2013.

Formerly a dual Canadian/U.S. citizen, Patricia Moon renounced her U.S. citizenship when she found out she owed hundreds of thousands of dollars in fines for not filing over twenty years of tax returns to the IRS. Aug. 24, 2014. (Matthew Little/Epoch Times)

The U.S. Consulate in Toronto has seen so many people looking to renounce that what used to be a three-week wait to go through the brief but formal process now stretches six months, to February 2015.

For Moon and many other former dual citizens, the sudden discovery of a potentially massive U.S. tax bill outweighed any benefits that come from having U.S. citizenship.

Most countries only tax citizens that live in the country and stop taxing them when they leave. The United States is one of only two countries in the world that tax based on citizenship rather than residency. The other is Eritrea, a small dictatorship in the horn of Africa.

But while Eritrea taxes foreign-based citizens at two percent, the U.S. wants its full due, minus similar taxes already paid to the Canadian government. Furthermore, Canadian retirement plans are so different from those in the U.S. that they can be heavily taxed.

For many Canadians, their retirement is their house; capital gains on a principal residence are usually tax-free in Canada. Not so in the U.S. That means American retirees who planned to retire on gains made through buying their own house in Canada could lose much of that investment. (Finance Canada and the Canada Revenue Agency did not answer questions about what would happen with these capital gains.)

Until 2010, none of this was an issue. But then Congress decided it was time to go after “tax cheats” with bank accounts in foreign countries. It passed the Foreign Account Tax Compliance Act (FACTA).

The controversial law required all foreign banks to report the accounts of U.S. citizens to the IRS. For most countries, that was illegal. But if banks didn’t comply, any payments coming to them from the U.S. would be slammed with a 30 percent withholding tax. In other words, if a bank had stock in Google, it could lose 30 percent of its earnings. FATCA would essentially freeze foreign banks out of the U.S. capital markets.

Unsurprisingly, many foreign banks want to cooperate with their governments to find a way around this, usually in the form of an intergovernmental agreement (IGA) akin to a tax treaty. Canada finalized its IGA earlier this year. It requires Canadian banks send the account information of customers with U.S. citizenship to the Canada Revenue Agency (CRA). The CRA then forwards that information on to the IRS, a tidy workaround to Canadian laws forbidding banks from sending that information directly to a foreign government.

But attorney John Richardson calls the information-sharing deal a “mechanism for the United States to extract after-tax Canadian capital out of the country.”

“What the U.S. is really doing is claiming the right to levy taxes on people who don’t live in the United States on income that is in no way connected to the United States. It simply cannot be tolerated,” said Richardson.

John Richardson, a lawyer and co-chair of the Alliance For Defence of Canadian Sovereignty, says by cooperating with the IRS, Canada has opened the door for the U.S. to extract after-tax Canadian capital. Aug. 24, 2014. (Matthew Little/Epoch Times)

Many Canadians don’t even realize that the U.S. considers them taxable citizens, nor do they want U.S. citizenship, he said. That’s because the U.S. considers those born to American parents outside the country American, or anyone born in the U.S. American, even if they live their whole life in another country, unaware they are accumulating a mountain of fees and taxes.

The IRS has changed its position slightly to wave the massive penalties for “accidental Americans” and those unaware they needed to file with the IRS. But they are still required to pay taxes.

Richardson co-chairs the Alliance for the Defence of Canadian Sovereignty. It is backing a lawsuit alleging that it is unconstitutional for the Canada Revenue Agency to cooperate with the IRS and discriminate between regular Canadians and those with dual citizenship. He expects the case to make it all the way to the Supreme Court of Canada.

Tax attorney Roy Berg thinks winning that suit could be a Pyrrhic victory—a win that comes at such at high cost it would be better to lose.

Berg thinks Richardson and other supporters are missing the fact that even if their court challenge succeeds and they overturn the information-sharing deal, FACTA still remains; the IRS will continue to pursue those taxes or punish banks for not reporting accounts held by U.S. citizens in Canada.

Not that Berg isn’t sympathetic to those caught in the crosshairs of the IRS crackdown, especially given that neither the tax agency nor the State Department put any obvious effort into informing Americans of the tax requirements.

“The IRS could have done a better job,” he said.

But if Canada’s information-sharing deal is cancelled, Canadian banks and their clients could pay a hefty price big enough to affect the national economy.

In Berg’s opinion, dual citizens need to be aware of their obligations and fulfill them.

But in former U.S. citizen Patricia Moon’s view, people like her are picking up the tab for unfair tax laws and an unconstitutional deal that links the Canada Revenue Agency to the IRS.

She was so worried about the impact of FACTA and Canada’s cooperation with the IRS that she had her son renounce his inherited U.S. citizenship. She was worried that the U.S. government would try to tax his financial inheritance: money and assets earned by his Canadian father in Canada.

After Moon and her son renounced, her fear turned to something else.

“Rage, absolute rage. Because not only is my home country doing this to me, but my adopted country where I have lived for 32 years has also sold me out to the American government. And the rage that Canadians feel that are involved in this is unusual for the Canadian psyche.”

Canada’s Finance department argues it gained significant concessions when it finalized its deal with the U.S., including that Canadian banks will not report certain retirement plans to the IRS that are taxable in the U.S. but not Canada.

That concession should protect those plans from taxation—unless the IRS figures out some other way to ferret out that information.