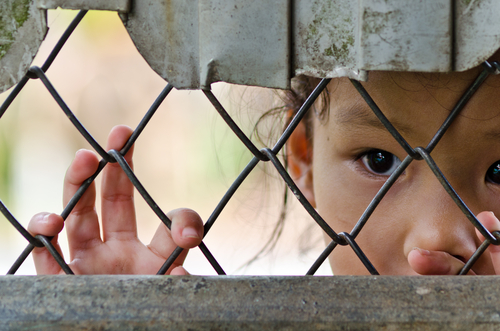 A child stare longingly from behind a fence. (Shutterstock)
US

WASHINGTON—Sex trafficking of minors in their community is much more prevalent than the American public is generally aware of. Regardless of race, ethnicity, or social class, a girl can be lured into a life of servitude. When caught by law enforcement, it’s more likely she will be misidentified as a runaway or homeless or a prostitute than as a victim of sex-trafficking that she truly is. Boys, too, are subjected to sexual exploitation.

These are some of the disturbing conclusions of the House Appropriations Subcommittee on Commerce, Justice, Science, and Related Agencies (CJS) hearing on Feb. 26, titled, “The State of Efforts to Stop Human Trafficking.”

“When most Americans hear the term ‘child trafficking,’ they think that it only happens somewhere else, such as Southeast Asia or Central America. Even if they acknowledge that trafficking happens in the United States, they assume the victims are foreign children brought into this country in order to be sold for sex in large cities,” testified John Ryan, CEO of the National Center for Missing and Exploited Children (NCMEC).

“In fact, we have learned that most of the victims of child sex trafficking in our country are American kids—most of whom initially leave home voluntarily as runaways and who end up being trafficked on Main Street, USA,” said Ryan.

Human trafficking investigator William Woolf of the Fairfax County Police Department testified, “Every community and every home in America is at a risk to falling victim to human trafficking; the most vulnerable group being children.”

“The [NCMEC] estimates that at least 100,000 American children are the victims of sex trafficking each year,” according to the Office of Juvenile Justice and Delinquency Prevention, a federal agency within the Department of Justice.

The Trafficking Victims Protection Act regards sex trafficking of children differently from adults, who must be coerced or deceived in order to be regarded as victims, according to Shared Hope International, whose stated mission is the eradication of sex trafficking worldwide. The child is a victim by the mere fact of engaging in commercial sex, regardless of her willingness or desire to participate.

Detective Woolf said that it is important to understand the form that human trafficking takes in the United States to be able to safeguard our children.

“The white work van abducting our children from street corners and forcing them into a life of prostitution is very rare,” said Woolf. “Rather, it is the smooth words and empty promises that trap and manipulate children.”

“Because we know children in the foster care system are being targeted by traffickers, NCMEC has streamlined our resources to provide more specialized services to social services and law enforcement with these cases,” Woolf said.

For 30 years, the NCMEC has served both as a national clearinghouse on missing and exploited children and a national resource center. Funding comes from Congress and from the private sector. The NCMEC, in partnership with the FBI and other federal agencies, operates the CyberTipline, where people can report leads and tips regarding child sexual exploitation on the Internet. In the 15 years that the CyberTipline has existed, more than 2.3 million reports have been processed.

Traffickers are now “routinely exploiting social media to find their victims,” according to Woolf. As young people nowadays are eager to share their inner lives on social media, traffickers look for opportunities to exploit vulnerabilities and offer false understanding and false love.

Woolf mentioned members of the underground Crips gang who “exploited hundreds of girls” in northern Virginia in their communities for more than six years. They recruited troubled young girls from Facebook and from public locations like bus stops, metro stations, and malls. At first, they offered sympathy and compassion. Once they had them in their power, the girls were trapped with narcotics and controlled through physical and sexual assaults.

“Most criminal gangs are getting into the business of sex trafficking,” said Woolf. He cited an FBI report that in over 35 states, gangs are involved in trafficking. It’s a “low risk, high yield” enterprise that enables the gangs to fund their operations. There is “a lot less risk than narcotics trafficking with the similar yield,” he said.

Cindy McCain, co-chair of Arizona Gov. Brewer’s Task Force on Human Trafficking, said that according to the NCMEC, a pimp can make $150,000–$200,000 per child each year and the average pimp has 4–6 girls.

Stephanie Vu testified that at the tender age of 12, she became a victim of sex trafficking. She was lonely and met an older boy who bought her things and took her to clubs. After a few months, he demanded something in return. He demanded that she dance at a strip club, because he needed money. She began skipping school and dancing in strip clubs. She described how she was forced into prostitution and lost control of her life.

The police picked her up and realized that she was a reported missing child. She was returned home, but only to return to her trafficker. After Vu suffered much physical abuse, a probation officer sensed that she was a victim and got help for her. Two organizations enabled her to recover a normal life: Shared Hope International and Youth for Tomorrow. When Vu was 15, she was sent 3,000 miles from her home because there was no recovering institution closer.

“Appropriate protective shelter and services are critical for the protection and restoration of child sex trafficking victims, but they do not exist in most of the country,” Vu said.

Stephanie’s case is not unusual. She said that she was one of the lucky ones. Other child sex trafficking victims are frequently misidentified as troubled youth: delinquents and runaways.

Vu said that misidentification is the main reason that trafficking victims are held as criminals and do not get access to services they need. “I was misidentified many times until, finally, a probation officer who knew about sex trafficking spotted the signs in me and got me the help I needed,” she said.

The 2014 omnibus spending bill signed into law last month included nearly $14.25 million for grants to help victims of trafficking and $67 million for missing and exploited children programs, according to Rep. Frank Wolf (R-Va.), chairman of the subcommittee.

In her written testimony, Vu wrote of the customers who bought sex acts from her that they had “disregard for my young age.” McCain said that these customers should be called what they really are— “child abusers.”

“The average age of induction into commercial sex in the United States is 13 years old,” said Woolf. He inferred from that young age that pimps are targeting younger victims compared to the past. They will find customers using the Internet; the most used website is Backpage.com.

This particular website was mentioned numerous times at the hearing and it especially rankles Woolf, who said, “Just last week, a jury convicted an Indiana man for human trafficking. The man forced four women—including a 16-year-old girl—into prostitution.” Wolf next cited the Justice Department’s press release that the man posted photographs of the females on Backpage.com.

Departing from his prepared remarks, Woolf said, “Backpage.com turns up again and again.” The congressman, whose grandchildren include six girls, said rhetorically, “How do the people who own Backpage.com live with themselves?”

Woolf stated in his written testimony that Backpage.com maintains a legitimate and legal function as a location to post online classifieds. At the hearing he said, “Backpage is openly—and in some sense legally—advertising commercial sex. It gives traffickers the opportunity to advertise these services to the general public and advertise essentially our children online.”

Wolf said that he has personally written Attorney General Eric Holder in the last two years to prosecute Backpage.com and similar websites, but the attorney general, Wolf said, has been unresponsive.