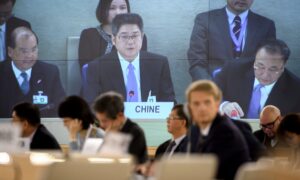 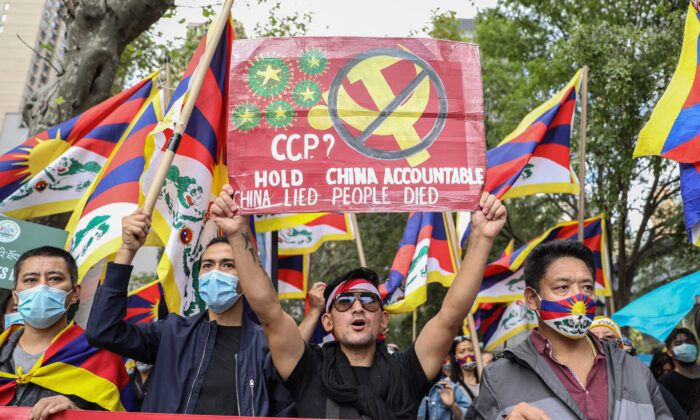 Democracy activists join together to call on governments to stand against the CCP’s suppression of freedom, democracy, and human rights, in front of the UN headquarters in New York City on Oct. 1, 2020. (Samira Bouaou/The Epoch Times)
China-US News

WASHINGTON—Attitudes among Americans toward China have soured significantly in the past three years, with 70 percent of those surveyed saying Washington should stand up to the communist regime in Beijing over its human rights record, even if it damages economic ties.

Nearly nine in 10 respondents to a Pew Research Center survey of more than 2,500 Americans conducted in February and published on March 4 said they see China, the world’s second-largest economy, as a competitor or enemy rather than a partner, the U.S.-based center said.

“Americans want more focus on human rights—even at the expense of economic ties—in bilateral relations with China,” the report said.

President Joe Biden’s administration, which took office in January, has singled out China as the “biggest geopolitical test” of this century, and endorsed a determination by the previous Trump administration that Beijing has committed genocide against the country’s Islamic minorities.

It has also criticized China’s crackdown on Hong Kong’s democracy movement and signaled it will maintain the Trump administration’s pressure on Beijing, albeit in coordination with allies.

The Pew survey suggested a slim majority of Americas, 53 percent, had confidence in Biden to effectively deal with China, lower than that for other global issues such as terrorism, climate change, the use of military force, and managing trade.

Across the board, negative views in the United States toward China have grown sharply since 2018, with 67 percent of respondents holding “very cold” or “cold” views toward China, compared to 46 percent three years ago. Just 11 percent of those surveyed held warm sentiments toward the country.

Perceptions that China-sponsored cyberattacks and Beijing’s rights record were “very serious” problems jumped 7 percent since 2020 to 65 percent and 50 percent, respectively, the report said.

During the Trump administration, Washington called out the ruling Chinese Communist Party over its trade practices, the origins of the coronavirus outbreak, espionage, human rights, and China’s controversial territorial claims in the strategic South China Sea.

Republicans and Democrats in the U.S. Congress have found common cause in confronting the Beijing regime, with lawmakers proposing a barrage of China-related legislation.

A majority of Americans surveyed, 54 percent, said China had handled the coronavirus outbreak poorly. But even more—58 percent—said their own country had also done a bad job.

By Michael Martina and David Brunnstrom