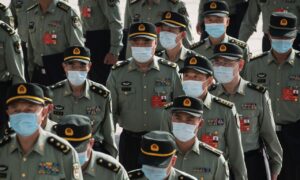 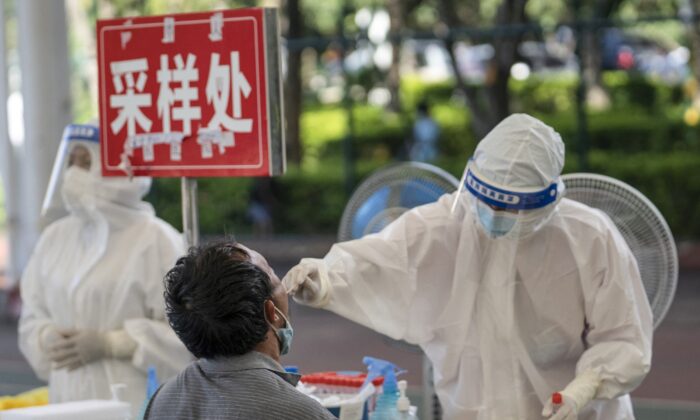 A man (L) is given a nucleic acid test for the Covid-19 coronavirus in Mangshi in the Dehong Dai and Jingpo Autonomous Prefecture, which borders Myanmar in China's southwestern Yunnan Province, on July 9, 2021. (STR/AFP via Getty Images)
US-China Relations

Americans Could Recover Trillions in Damages From Lawsuits Against CCP Over Its Pandemic Coverup: Expert

Americans could sue the Chinese Communist Party (CCP) for trillions of dollars over its coverup of the origins of the COVID-19 pandemic, according to lawyer and economist Jim Rickards.

The pandemic, which has caused a reported global death toll of 4 million, including more than 600,000 in the United States, likely was caused by a leak from the Wuhan Institute of Virology (WIV), Rickards writes in his book “The New Great Depression: Winners and Losers in a Post-Pandemic World.”

Meanwhile, the CCP has continuously tried to hide the source to “deflect responsibility and neutralize trillions of dollars of damage claims,” he says.

“It’s a crime against humanity and it’s gross criminal negligence,” the author told The Epoch Times in an interview.

Americans can thus take the CCP to court in the United States to seek compensation for losses suffered as a result of the pandemic, Rickards said. He estimates that $3 trillion to $4 trillion in damages could be awarded to Americans in future lawsuits against the regime.

He says that Americans have grounds to sue under both domestic law, such as tort law and racketeering laws and international law.

While some legal experts contend that such lawsuits are unlikely to succeed because Beijing can claim sovereign immunity, a legal rule that insulates countries from being sued in other countries’ courts, he thinks this barrier can be overcome.

“Sovereign immunity is a legal doctrine with limitations, not an all-purpose, get-out-of-jail-free card,” the author said. “The CCP is a political party, not a sovereign.”

In addition, there are numerous non-sovereign defendants that Americans could sue, Rickards said, including “the Wuhan lab itself, individual researchers, individual and corporate suppliers, and U.S. defendants … who aided and abetted the gain-of-function research and gene splicing activities.”

The possibility that the virus leaked from the WIV, dismissed as a conspiracy theory at the start of the pandemic, has since garnered international scrutiny as new evidence has emerged, including how WIV staff became sick with COVID-19-like symptoms before the outbreak was identified. Meanwhile, the Chinese regime hasn’t allowed outside access to records at the facility, preventing any meaningful investigation into the virus origins.

President Joe Biden on May 26 ordered his administration to produce a report in 90 days on the origins of the virus. He said intelligence agencies are looking at rival theories, including the possibility of a laboratory accident in China.

Meanwhile, Republican lawmakers have accused the administration of not doing enough to hold the CCP accountable over its ongoing coverup of the pandemic.

Former President Donald Trump, in a July 11 speech at the Conservative Political Action Conference in Texas, said, “We will hold China accountable for the damage and suffering they have caused, and make them pay trillions of dollars in reparations to us and to the world.”

Republican lawmakers have already introduced several measures to make it easier for Americans to sue the CCP in court, including those stripping the regime of sovereign immunity.

Several class actions have been initiated in the United States and other countries suing the regime over its alleged role in causing the human and economic devastation wrought by the pandemic. Two U.S. state governments have filed lawsuits against the CCP.

Rickards said that such lawsuits “would face some procedural hurdles, but they can be overcome with persistence and good lawyering.”

While some may be skeptical about the possibility of actually collecting trillions of dollars in damages from Beijing, Rickards believes it’s feasible.

The Chinese regime has $1.4 trillion in U.S. Treasury securities in their reserve position, he noted.

“So, all you need is a court order directed to the Secretary of the Treasury ordering [China] to transfer their securities to a custodian for the benefit of the victims.”

Rickards said that such an outcome would significantly “cut China’s liquid reserves.” As of July, China has approximately $3.2 trillion in foreign currency reserves.