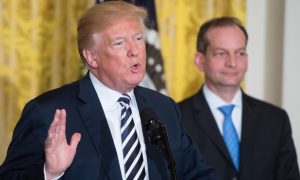 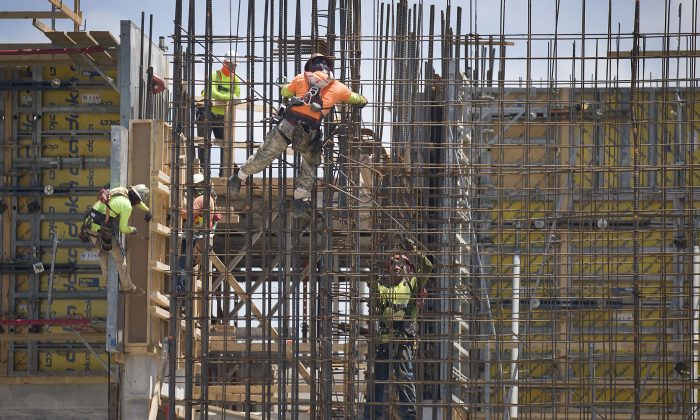 Number of Americans on Welfare Dropping Under Trump Administration

Americans’ dependence on government programs has diminished during the presidency of Donald Trump, most visibly in the shrinking of food stamp enrollment.

In the first 27 months under Trump, food-stamp enrollment dropped by more than 6.7 million, compared with the less than 3.6 million drop under the last 27 months of the Obama presidency.

In April, about 11 percent of Americans (some 36 million) were on food stamps, the smallest share since 2009.

The average benefit has dropped under Trump, from about $250 per participating household in February 2017 to about $240 in April (pdf), suggesting that even those enrolled are doing better, since the benefit declines with the rising income of the recipient.

The enrollment in Medicaid and CHIP, government-sponsored health insurance for children and the poor, also declined under Trump—by 2.5 million between January 2017 and March. The drop came at the tail of a massive Medicaid expansion enabled by the Affordable Care Act (Obamacare).

Enrollment in the welfare programs, specifically the Temporary Assistance for Needy Families (TANF) and “separate state programs,” dropped by more than 633,000 under the first 23 months of Trump’s presidency, compared to a drop of about 521,000 under the last 23 months of his predecessor, President Barack Obama.

Unemployment has averaged about 4 percent under the first 29 months of Trump, a number unseen since 1970.

Part of the economic success under Trump comes from his entering office during a period of expansion. Yet the economy has also been boosted by his cutting of taxes and regulations. By providing a pro-business climate, he also sparked optimism for investment.

Persistently low unemployment rates accompanied by low inflation, likely in part due to the return of many discouraged Americans to the labor force, surprised many economists. The Federal Reserve even cited the labor market’s performance as a basis for possibly revamping its analysis for setting monetary policy.

Many economists used to consider 4 percent unemployment as “full employment.” But the unemployment rate has remained under 4 percent for 13 out of the 15 past months (ending June). That suggests more flexibility in the labor market, perhaps due to the fact that the labor force participation rate among productive-age men (24–54 years old) is still relatively low—88.7 percent in June, compared to more than 97 percent in the 1950s.

The resilience of the economy to Trump’s forceful international trade policy, including his imposing tariffs on China and others, has also come as a surprise to some.

The administration has collected more than $23 billion on the tariffs, though they’ve also led to increased prices of some products.