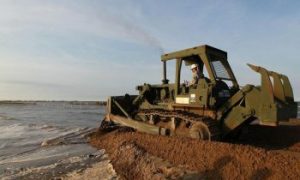 RIO DE JANEIRO-Two American tourists, Sarah and David, were wounded in Rio on June 29 when a manhole suddenly exploded. The couple was walking near Copacabana Beach in the late morning of Tuesday, when a manhole on República do Peru Street, in southern Rio de Janeiro blew.

According to the fire department, the wife suffered severe burns to about 80 percent of her body and is hospitalized in serious condition at Miguel Couto Hospital in Gávea. The hospital said it is not authorized to reveal information.

After the incident, the street was closed to traffic between Nossa Senhora de Copacabana and Atlantic avenues. The case is being investigated by Rio’s Tourist Police.

Staff of Light, a Rio-based private electricity services company, was on the scene cooling the culvert by early afternoon. So far the company has not made a statement on the cause of the explosion.

According to local media, Sarah and David live in Ohio and arrived on their holiday in Rio late Monday. They were staying at a hotel near the incident.