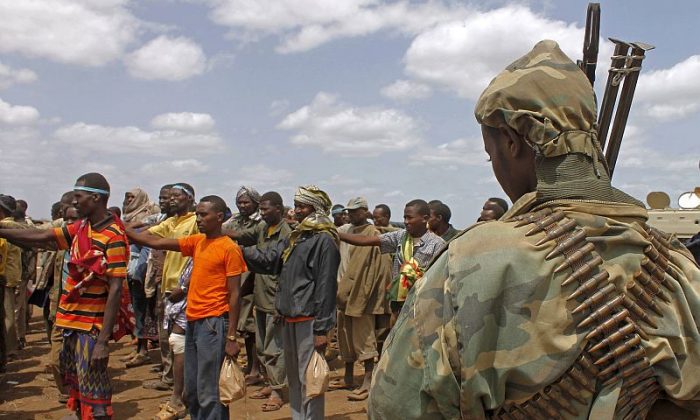 Members of the Al-Qaeda-linked Shebab standing after giving themselves up to forces of the African Union Mission in Somalia (AMISOM) in Garsale, north of the capital, Mogadishu, on Sept. 22, 2012. (Mohamed Abdiwahab/AFP/File Photo via Getty Images)
International

NAIROBI—A U.S. service member has been killed in Somalia during a Somali-led mission against the al Shabaab militant group, U.S. military officials said on Friday.

U.S. Africa Command said the service member died on Thursday while U.S. forces were advising and assisting a Somali National Army operation about 40 miles west of Mogadishu near Barii, Somalia.

“U.S. forces were conducting an advise and assist mission alongside members of the Somali National Army,” it said in a statement.

“U.S. forces are assisting partner forces to counter al-Shabaab in Somalia to degrade the al-Qaeda affiliate’s ability to recruit, train and plot external terror attacks throughout the region and in America.”

Two other U.S. servicemen were wounded during the operation, when U.S. troops were hunting an al Shabaab commander near the Shabelle river, a Mogadishu-based security source told Reuters. There were no casualties among the Somali special forces, he said.

Al Shabaab wants to overthrow the weak Western-backed Somali government and impose its own strict brand of Islamic law.

Somalia has been torn apart by civil war since 1991, when clan-based warlords overthrew a dictator and then turned on each other.