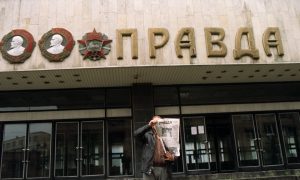 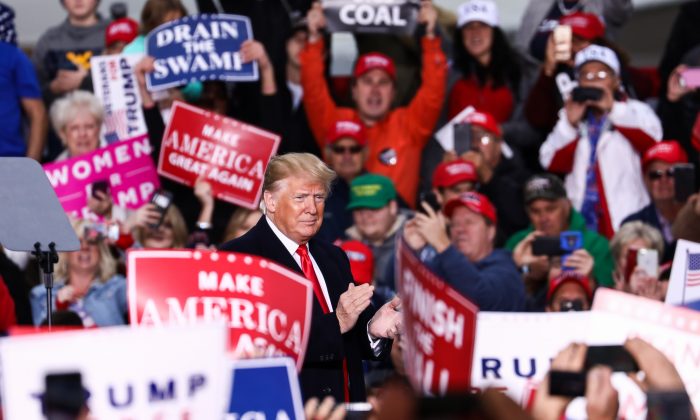 “In a time of universal deceit, telling the truth is a revolutionary act.”

Our leftist media is officially, universally deceitful. Not just BuzzFeed. Journalism schools have sicced a class of leftist partisans on us posing as journalists, fact-checkers, and purveyors of the truth. They write the narratives that surround us as a nation. They are the all-powerful Oz.

For more than a decade, it was difficult to imagine our country surviving with such a media. We appeared doomed to live within the leftist echo-chambers, imprisoned in the minds of the so-called elites. Or so it seemed. They helped America elect a total phony, an inept poseur, a shadow of truth. Twice. As those eight years unfolded, many thought we were destined for the ash-heap of history. It looked that bad.

Cultural institutions have been entirely left-dominated. Hollywood. Music. The Media. The education system. Publisher Andrew Breitbart and his aphorism “politics is downstream from culture” was staring us in the face. It looked hopeless.

Yet, in the middle of hopelessness, an earthquake shook us to the core. They lost. Hillary Clinton lost. Trumped. There are lots of reasons why, but the fact remains: As we were staring down the long road to becoming Venezuela, the corruptocrats lost—unexpectedly. Clinton was supposed to win in a landslide. The center-right’s quest to renew America was going to be buried by history. Clinton had all the cultural organs on her side. The stars were aligned in her historical quest to be the first female president.

Except they weren’t. And there’s an important lesson here. What happened? Well, it certainly wasn’t that infantile Russia narrative.

Let me suggest a better theory: Truth was finally being told, and President Donald Trump was the truth-teller. By truth, I mean the promise of American renewal, the truth about American exceptionalism. Once upon a time, exceptionalism resided in homes, in businesses, in churches, in civic groups, and throughout our entire country. Once upon a time, truth united us. It’s how we were founded, and survived. It’s why we won World War II. It’s why we won the Cold War without firing a shot. And it’s why Clinton lost.

The miracle of American Truth won, and that truth looks like this: American exceptionalism is real. It’s undergirded by free markets, private property, and limited government. The principles of freedom, the pursuit of self-interest, and the ideals as set forth by the Founding Fathers made a great nation. Our country is based on ideas—great ones.

The American Dream is real. The concept that each generation can do better than the one before is a primary motivator for Americans. It’s why our standard of living has consistently increased. It’s why the not-so-subtle leftist message of American decline was rejected.

And it’s not only about increasing wealth. It’s why we want better education for our kids. It’s why we have thousands of little niches of recreational fun: car clubs, triathlon junkies, pick-up basketball leagues, gardening clubs, quilt clubs, reading clubs, surfers, paddle-boarders, cooking obsessives, movie and music festivals, and more. A thousand-and-one niches. Actually, more than that. And all these niches have their professionals and businesses that serve them. The pursuit of happiness writ large.

Families rule. The little troops hang together. They form the manner in which we pass our values on. Our natural tendency to rear and help our children excel will always be a top priority. It’s biological. It’s in our DNA as a country. Leftists hate it, but it’s how we roll.

Coming from a Judeo-Christian background, Americans have always searched for goodness, for something they can identify with that is good, or better. We crave to seek beyond ourselves, to sacrifice ourselves to serve a greater cause. It’s implanted in our souls. We seek to fill our “God-shaped void” described by Augustine and Pascal.

As Americans, we share the hodge-podge of ideas espoused above. As Americans, we treasure them. As Americans, we don’t want to see these ideals destroyed. It’s why Clinton lost in 2016, and why Barack Obama can’t fill auditoriums. It’s also why the left will lose in the future, because leftists won’t likely change their direction.

Those constructs are why the polls, the experts, and the manipulators were wrong in 2016. The same way they were wrong in 1776. Benjamin Franklin put it this way: “The longer I live, the more convincing proofs I see of this truth: that God governs in the affairs of men. And if a sparrow cannot fall to the ground without His notice, is it probable that an empire can rise without his aid?”

Breitbart’s saying about politics and culture got Trumped, by a billionaire brawler raised in Queens. One who is hated by our cultural elites. One who was savvier than them all, worked harder than them all. One who understood the American principles stated above were #winners. He overcame the newly preached anti-American norms. He underspent Clinton by half. He had 92 percent negative media coverage. Hollywood kept telling America how awful he was. Musicians wouldn’t come near him. Professors yammered on about the horrors of “Drumpf.” Google, Facebook et al. went to war against him. Even the FBI and Department of Justice used their considerable arsenal to try to elect his opponent.

You could call it a miracle. Perhaps it was. But below the contemporary, somewhat shallow waters of the cultural elite, were the deeper truths of the American Revolution. And those depths rose up, becoming Clinton slayers. Leftist slayers. Cultural saviors, if I may. The truth was more powerful than our cultural-elites’ counterfeits.

Greatness is in the DNA of America, built into its ideals, and its history. As much as the left wants to denigrate our ideals and stories, they won’t succeed, because the human soul yearns for freedom. The left may pretend to be omnipotent and omnipresent, but they aren’t. They just pretend, bluff, and put on a good show. They counterfeit goodness for their talking points, but the current left is getting sucked into anti-American talking points way too easily these days.

And that will be their downfall.

The extremist takeover of House Democrats will tear them apart. The House has already been paralyzed by the government shutdown. They can get nothing done. Ocasio-Cortez is the new face of the party; Pelosi is the old face. Both of them are inept and pitiful for totally different reasons. Yet, we get to watch them flail in real time. During this same time, we will get to watch each of perhaps 30-plus Democratic candidates run farther to the left of impossible to outdo each other to win their party’s nomination.

I’m one who believes the Democrats probably won the House through election fraud—at least a lot of their wins. Now, we get to watch them reap the whirlwind. Leftists imploding after their “win” gives Franklin’s quote new meaning. The media may continue its silence about inter-leftist warfare, but the truth is self-evident. These Democrats will be incapable of unifying in any meaningful way to stop the American truth agenda championed by Trump.

He has been rewarded with astoundingly foolish enemies. He was handed the shutdown over an issue the American public overwhelmingly supports. Hispanics and African-Americans are rallying to Trump, not the left. I can’t wait to see how Trump handles the snit-fit of Pelosi canceling the State of the Union speech.

If Republicans would begin to understand America’s realignment for renewal, we would see miracles happen aplenty. If the new GOP aligns with the DNA of American greatness, the next two years could be astonishing. If they can see clearly to keep rebuffing Mitt Romney and his losers, or to stop trying to swallow camels, the winning would be overwhelming.