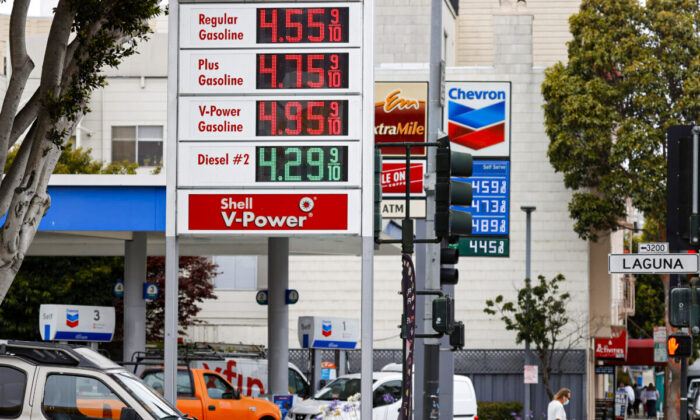 Gas prices nearing $5 per gallon are displayed at Chevron and Shell stations in San Francisco on July 12, 2021. (Justin Sullivan/Getty Images)
Thinking About China

China and Russia decouple their gas trade from the U.S. dollar

Think energy prices are high? They could be at a short-term low.

The global economy is interconnected, with China stumbling about near its center. Nothing proves this better than the interrelation of global gas prices and China shooting its own economy in the foot through regional COVID-19 lockdowns that persist month after month.

Gas prices are higher than average due to Russia’s invasion of Ukraine and the resulting sanctions and countersanctions. But China’s locked-down economy diminishes the demand for energy. That could change quickly if Xi Jinping unlocks China’s economy after the upcoming Chinese Communist Party (CCP) congress, which would increase global energy prices. He has every incentive to do so, as once he has secured that third term, he has less reason to stick to his failed “zero-COVID” policy.

Much of the liquified natural gas (LNG) that Russia would have sent to Europe but for the energy war is being slowed either by European capitals, which want to punish Moscow for the invasion, or Moscow itself, which is punishing Europe with preemptive supply cuts.

To maintain Russian revenues, that LNG must go somewhere—such as China, the world’s biggest likely market—because of the Siberian pipeline and more planned. In 2021, Russia exported 16.5 billion cubic meters to China, and as of Sept. 7, it’s pricing future energy exports in a 50–50 split between the Russian ruble and Chinese yuan. That puts downward pressure on the global demand for U.S. dollars and upward pressure on inflation.

But China’s slowing economy is reducing its need for LNG. As a result, the price for LNG in Asia is dropping in the short term while the price in Europe rises. China’s energy traders are taking advantage of the price difference for arbitrage. Beijing can buy LNG from Russia cheaply and sell it, sometimes directly to Europe, at a higher price.

A single LNG cargo, such as the one recently resold by China’s JOVO Group to a European buyer, can reportedly yield as much as $100 million in profit. Sinopec has sold 45 LNG cargoes on the international market, which frees other LNG for cheaper delivery everywhere, regardless of whether it goes direct to Europe.

“As Europe attempts to wrestle out of its dependence on Russia for energy, the irony is that it is becoming more dependent on China,” the Financial Times stated.

Everyone who cares about profits and the economic strength of the United States and its allies has a short-term incentive to look the other way as Russian oil and gas leaks through porous sanctions to Europe via China. Keeping that Russian supply in the spot markets is critical to keeping down inflation and avoiding recessions in the West, but it also increases Beijing’s influence.

The sanctions aren’t wrong; they’re just backfiring with higher prices, so Russian President Vladimir Putin keeps making money, as do his friends in Beijing and New Delhi. Whenever energy prices drop, energy dictators in Moscow, Tehran, and Riyadh have reason to start a war and scare oil traders into buying more now for a rainy day and shippers into shipping less. The result is higher energy prices around the world.

The Saudis seek a long-term minimum oil price of $100 per barrel, and sanctions on Russia and Iran have gotten them there and beyond. If the sanctions start working more effectively, the price could go much higher.

It didn’t have to be like this. The Saudis have traditionally been close allies of the United States. In exchange for arms sales and defense from countries such as Iraq and Iran, they open their massive oil spigot wider whenever Washington asks to keep energy prices down.

However, their inclusion of Russia in OPEC+ and their increasingly friendly relations with Beijing should concern us. Riyadh is straying toward its fellow autocrats around the world and is starting to weaponize its control of oil against U.S. foreign policy goals.

Russia and China have strong relations because each has what the other needs, and both want independence from the West’s sanctions. The Saudis would be icing on their cake.

The fundamental issue is that the world’s dictators are getting stronger and more organized. Wars and high energy prices facilitate the process. Their increasing collective power decreases their fear of economic or military repercussions from the West for violating international law. Enforcing the law is hard, but the longer we wait, the harder it becomes.