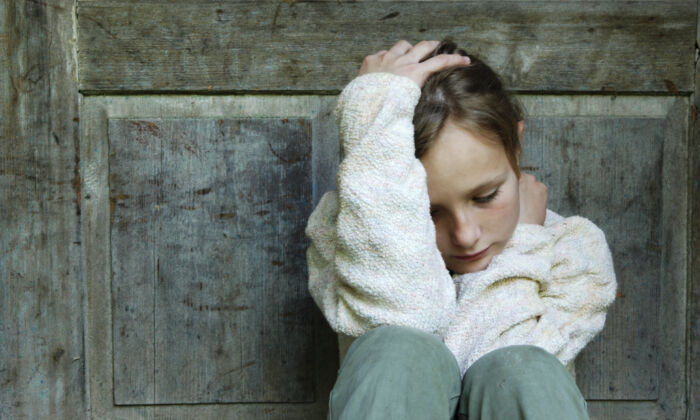 More than 200,000 kids in the United States lost a parent or primary caregiver during that same period. (Halfpoint/iStock)
US

More than two years into the COVID-19 pandemic, children in America are struggling with anxiety and depression at unprecedented levels, according to the 2022 Kids Count Data Book.

Released on Aug. 8 by the Annie Casey Foundation, the annual 50-state report, tracks how children and families are faring nationally and in every state using 16 indicators in four domains: economic well-being, education, health, and family and community.

“The coronavirus upended everyday life to an extent not seen since World War II,” wrote Lisa Hamilton, the foundation’s president and CEO in the report foreword.

“It is no surprise that millions of parents, caregivers, and other adults are feeling overwhelmed. So are children, who face what the U.S. surgeon general has called a ‘mental health pandemic’ for youth.”

As schools went virtual and families isolated themselves, more than 1 million people in America died from the novel coronavirus, including more than 1,600 children.

More than 200,000 kids in the United States lost a parent or primary caregiver during that same period, the report states.

Children in more than 40 states and the District of Columbia were more likely to experience anxiety and depression during the first year of the COVID-19 crisis than in previous years, it claims.

Nationally, the number of kids ages 3 to 17 struggling with these issues jumped by more than 1.5 million, from 5.8 million to 7.3 million (or roughly 9 percent to 12 percent).

In Oregon, the increase was even higher.

Today, nearly 117,000 children in the state report struggling with these issues.

“The state’s mandate-heavy approach to the COVID-19 pandemic that isolated our kids and disrupted learning has had devastating consequences on students’ mental health and wellness,” gubernatorial candidate Christine Drazan told The Epoch Times.

“No parent is surprised by this. Unfortunately, we are just beginning to understand how much damage was done.”

“Kids in Oregon were some of the last to return to school in the entire country, so it’s no wonder that the increase in anxiety amongst students in Oregon is higher than in other states,” Oregon Moms Union president and co-founder MacKensey Pulliam told The Epoch Times.

“Parents saw firsthand the toll this took on our kids and it’s why we pushed back so hard.”

In a state-to-state comparison of overall child well-being using the four indicators, Oregon ranks 26, according to the report.

The state is 41st in the nation for education, with 66 percent of 4th graders “not proficient” in reading and 69 percent of 8th graders not sufficient in math.

Oregon sits at 18 in the community wellness index, with 30 percent of children living in single parent families. That is slightly better than the national average of 34 percent.

It ranks 30th in economic well-being, indicating that 31 percent of children live in a household where high housing cost creates an undue burden, in which more than 30 percent of monthly household pretax income is spent on housing-related expenses (down from 43 percent in 2017), and 27 percent of parents lack secure employment.

Oregon 8th graders reported having unmet emotional or mental healthcare needs during the pandemic due to being “unable to access a healthcare provider.”

The inability to access mental health services took its heaviest toll on children that identified as gender diverse (49 percent) or having multiple gender identities (31 percent), followed by females at 18 percent and males at 6 percent, according to the report.

Overall, 4 percent of Oregon youth had no health insurance and 4 percent lived in areas with high poverty rates.

“There are many nuances regarding youth mental health in Oregon and the United States, and each data point only tells part of the story,” wrote Jyoni Tetuso Schuler, a research manager at Our Children Oregon wrote in response.

The report calls on lawmakers to heed the U.S. surgeon general’s warnings and respond to this mental health crisis by developing programs and policies to ease mental health burdens on children and their families.

Those include prioritizing meeting children’s basic needs for basic nutrition and mental health.

“Youth who grow up in poverty are two to three times more likely to develop mental health conditions than their peers,” the report states.

It also asks that every child has access to mental health care by providing the 250-to-1 ratio of students to counselors recommended by the American School Counselor Association.

“As a parent, I have firsthand experience with how these issues impacted my own kids,” said Drazan.

“As governor, I will work to make the American School Counselor Association’s recommendation that every child has access to mental health care by providing the 250-to-1 ratio of students to counselors a reality in Oregon.”

“Mental health is just as important as physical health in a child’s ability to thrive,” wrote Hamilton.

“As our nation continues to navigate the fallout from the COVID crisis, policymakers must do more to ensure all kids have access to the care and support they need to cope and live full lives.”

The Kids Count Data Book and Kids Count Index are compiled using data from the U.S. Census Bureau’s Community Survey, among other sources.