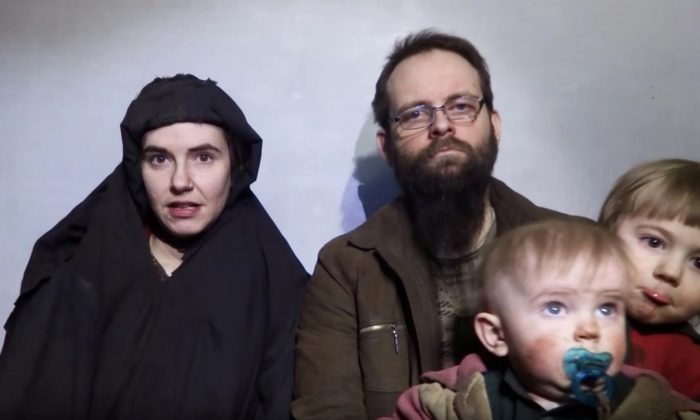 A still image from a video posted by the Haqqani terror group on Dec. 19, 2016, showing American Caitlan Coleman, her Canadian husband Joshua Boyle, and their two sons. (screenshot)
US News

American Hostage Caitlan Boyle Speaks Out After 5 Years of Captivity

Caitlan Coleman, a woman who was held as a prisoner by the Taliban for five years and suffered abuse at the hands of her captors, has spoken out for the first time from her hospital bed.

“Why don’t I have the right to just be myself and be with my husband and children?” Caitlan Boyle wrote in an email, the York Daily Record reported. “Everybody says ‘No, you have to come out and talk about it’, but no, no I don’t and everybody nice has said it’s my choice and I can talk when I want, and to whom I want.”

“My wife has been through hell, and she has to be my first priority right now,” her husband, Joshua Boyle, told The Associated Press in an email.

They were captured five years ago while hiking in Afghanistan.

She was taken to the hospital last week for a medical emergency.

Joshua Boyle and Caitlan Coleman: what were two Western backpackers doing in Afghanistan in the first place? https://t.co/0D42LZQ6th

While in captivity, Boyle said that “fond memories helped to brighten some of the dark days.” She gave birth to three children while held captive. They’re now living in Ontario, Canada, and are spending time with grandparents.

“I hope to be discharged soon and that the Canadian medical system is doing a pretty good job taking care of me,” she wrote to the paper.

The family was freed last week after Pakistani authorities said their military freed them from a Taliban-affiliated network of terrorists known as the Haqqani. CIA Director Mike Pompeo noted that the family was freed as an arrangement between the terrorist network—not as part of a raid.

“We’re sitting as hostages with a lot of time on our hands,” Joshua Boyle said. “[We decided] hey, let’s make the best of this and at least go home with a larger start on our dream family. We always wanted as many as possible, and we didn’t want to waste time. Cait’s in her 30s, the clock is ticking.”