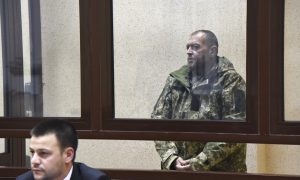 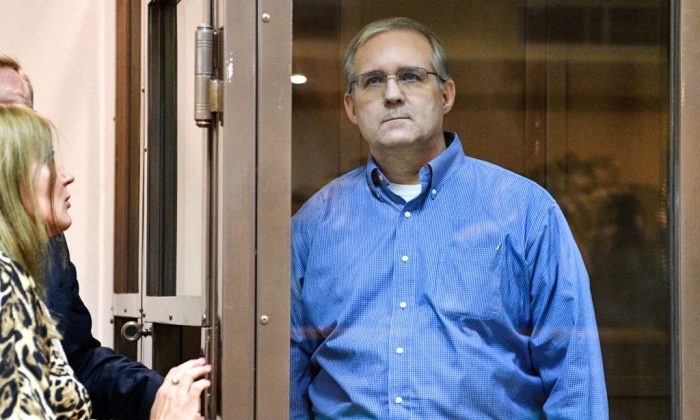 Paul Whelan, a former US Marine accused of espionage and arrested in Russia, listens to his lawyers while standing inside a defendants' cage during a hearing at a court in Moscow on Jan. 22, 2019. (Mladen Antonov/AFP/Getty Images)
US News

American Held in Russia on Spying Charges Was Misled: Lawyer

The American who was accused of spying by Russian authorities was misled before his arrest, his lawyer said on Jan. 22.

Former U.S. Marine Paul Whelan was detained in a Moscow hotel room on Dec. 28. His lawyer, Vladimir Zherebenkov, said his client believed a thumb drive given to him in the hotel room contained only holiday photos, instead of confidential information.

A judge rejected a bail release for Whelan, who appeared in a Moscow court on Jan. 22. If found guilty of espionage, he could be sent to prison for up to 20 years under Russian law.

Zherebenkov said that his client had accepted the information unknowingly. The thumb drive had contained a list of employees at a secret Russian state agency, according to Russian online news portal Rosbalt.ru.

“Paul was actually meant to receive information from an individual that was not classified,” Zherebenkov told reporters. “These were cultural things, a trip to a cathedral, Paul’s holiday … photographs. But as it turned out, it [the thumb drive] contained classified information.”

Whelan, who holds United States, British, Canadian, and Irish passports, has denied all charges. He is currently being held in Lefortovo prison in Russia.

Rosbalt.ru claimed Whelan had been spying for 10 years via the internet to identify targets from whom he could obtain information and that the list he was caught with had long been of interest to U.S. spies. Rosbalt.ru cited an Russian intelligence source it didn’t identify for its story.

Whelan’s lawyer said his client was unable to see the contents of the thumb drive because he was detained before he was able to open it. He said Whelan made a 15-minute speech in court, during which he rejected the allegations made against him.

His lawyer declined to clarify if Whelan knew the individual who handed him the drive. He said Whelan had been experiencing some minor health problems and was in custody receiving treatment. Whelan is the director of global security at BorgWarner, a Michigan-based automotive parts supplier, according to a company statement.

“The Trump administration is very focused on making sure that every American who’s detained anywhere in the world has been treated properly, handled accordingly, and where they are not, using every lever of U.S. power to make sure that they are returned home safely to their family. That’s the case in Russia,” Secretary of State Mike Pompeo said Jan. 11.

The arrest of Whelan comes weeks after Russian national Maria Butina pleaded guilty to a single count of conspiracy in U.S. federal court for acting as an agent for the Kremlin without registering in the United States.

Daniel Hoffman, a former CIA Moscow station chief, said it was “possible, even likely” that Russian President Vladimir Putin had ordered Whelan’s arrest to set up an exchange for Butina.

Whelan’s family have maintained his innocence and are working on bringing him back to the United States. He is the son of Manchester, Michigan, residents, Ed and Rosemary Whelan. His family said Whelan had traveled to Russia to attend a friend’s wedding.

Whelan’s sister, Elizabeth, said in an emailed message to locals that they need more help to spread the message.

“You may or may not know already that the American citizen being held in Lefortovo Prison in Moscow, Russia, is our son and brother, Paul Whelan,” the email stated. “However with the number of issues on their plates, we have to ask our friends to help amplify the message.

“We need Paul Whelan out of that jail, out of Russia, and back home.”

Included in the email is a call for people to sign a White House petition calling for the release of Whelan. The petition needs to garner 100,000 signatures by Feb. 9 to get a response from the White House.

“We are extremely worried about him and want to see his immediate release,” the petition created by Elizabeth stated. “Due to the workings of the Russian court system, he could be held for years before a trial or sentencing.”