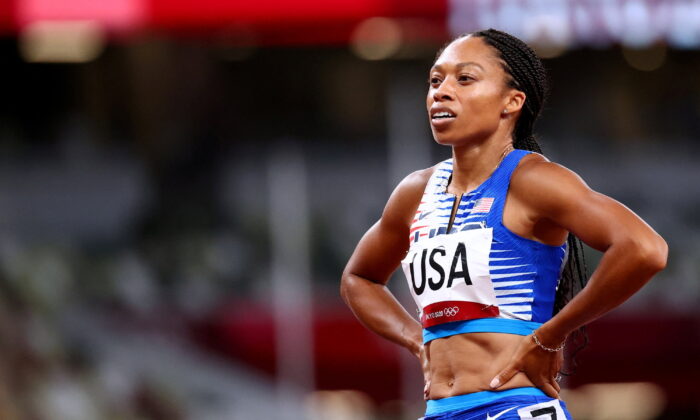 Allyson Felix of the United States reacts after winning gold during the Tokyo 2020 Olympics Athletics for Women's 4 x 400m Relay Final, at the Olympic Stadium in Tokyo, on Aug. 7, 2021. (Lucy Nicholson/Reuters)
Sports News

Seven-times Olympic gold medallist Allyson Felix said on Wednesday that she would run one final track season, months after competing in her fifth Games.

The most decorated American track and field Olympian picked up bronze in the 400 metres and gold in the 4×400 metres relay in Tokyo last year, having already confirmed that it would be her final Games.

In an Instagram post, she said that she would say goodbye to the sport “with one last run.”

“This season isn’t about the time on the clock, it’s simply about joy. If you see me on the track this year I hope to share a moment, a memory and my appreciation with you,” said Felix, 36, who is expected to run the Penn Relays later this month.

The 13-times World Champion became an advocate for working mothers after giving birth to her daughter, Camryn, via an emergency C-section in 2018.

In an opinion piece for the New York Times, she said she faced pay cuts from sponsors including Nike after having her child and competed in Tokyo wearing shoes from her own “Saysh” line.