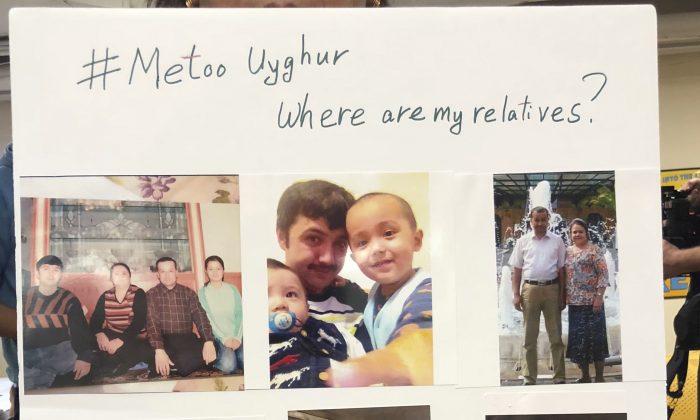 A poster showing missing relatives is displayed during a gathering to raise awareness about loved ones who have disappeared in China's far west in Washington DC on Feb. 24, 2019. (Christina Larsen/AP)
US News

US Families of Missing Uyghurs Speak Out at Washington Event

WASHINGTON—Nearly two years after the Chinese regime began to detain members of Muslim minority groups in western China, a growing number of family members abroad are refusing to remain silent.

On Feb. 24, about three dozen relatives of some of the 1 million Uyghurs, Kazakhs and others being held without charge spoke out about the mass detentions at an event in Washington, hoping to raise awareness of what many are calling a human rights travesty but which Beijing defends as necessary to counter violent religious extremism.

“If you know someone who is missing, it is time to speak up,” said Ferkat Jawdat, a Virginia-based software engineer. He’s lost contact with his 52-year-old mother in Xinjiang, a Chinese region that’s home to the predominantly Muslim Uyghur (pronounced WEE-gur) and Kazakh ethnic minorities.

Xinjiang has been subject to a severe security crackdown in recent years that has made surveillance cameras and police checkpoints ubiquitous. The internment camps are a relatively recent phenomenon, but have expanded rapidly as a primary means of intimidation and social control.

For members of the Uyghur diaspora, losing a family member into the sprawling system has become all too common.

Jawdat co-organized Sunday’s gathering so that Uyghurs in the United States could start collecting information on their parents, grandparents, aunts and uncles, and even children whose whereabouts are unknown. They plan to present the data to the United Nations Working Group on Enforced or Involuntary Disappearances and the U.S. State Department.

Some of the attendees have confirmation that their loved ones are detained in Xinjiang. Others have simply lost contact—and fear the worst.

“We want to raise awareness about what can happen to American families—many of these people here are American citizens,” said Jawdat, a U.S. citizen who helped organize the event, held in the basement of a public library.

Those in China with relatives abroad come under particular suspicion from the Chinese security forces, increasing the likelihood of them being interned.

Abduwaris Ablimit, a 34-year-old chef living in Boston, said his first impulse had not been to speak out, frightened of what the Chinese authorities might do in retaliation.

The last time he heard his parents’ voices was on a recorded message through the Chinese messaging app WeChat.

“Please don’t call me again, son,” his mother said through sobs, Ablimit recalled. “Maybe one day we will see each other again.”

She sent the message in July 2017. Since then, Ablimit has lived in fear that his parents and brother, well-known Uyghur pop singer Zahirshah Ablimit, were sent to an internment camp.

His suspicions were confirmed in December, when Radio Free Asia (RFA) reported that a police officer in Ablimit’s Xinjiang hometown said he had been involved in detaining Ablimit’s parents. A second officer told RFA that he had arrested Ablimit’s brother.

Former camp detainees have told The Associated Press that after being confined in the camps, they were forced to renounce their faith and swear fealty to China’s ruling Communist Party.

They said they were subject to political indoctrination and psychological torture, without legal recourse. They describe conditions in the camps as grim, with poor food, crowded cells, and little medical assistance.

Apart from Turkey, whose people share cultural, religious and linguistic ties with Uyghurs, the Muslim world has remained largely silent over the camps. Experts attribute that to their economic dependence on China, similarly authoritarian political systems and Beijing’s claims that it is countering a shared terror threat.

In the face of such silence, relatives of internees are taking it upon themselves to speak out.

After more than a year of being unable to reach his parents, Ablimit started talking to the media and reaching out to the U.S. consulates in Beijing and Shanghai. According to text messages reviewed by the AP, Ablimit received threatening messages from someone who claimed to be a Chinese police officer. The person urged Ablimit to stay quiet about his family’s case.

But Ablimit, who traveled to Washington for the Feb. 24 meeting, wasn’t swayed.

“I’m not afraid anymore,” he said. “I just need to find the truth.”

By Christina Larsen. The Epoch Times edited this article.