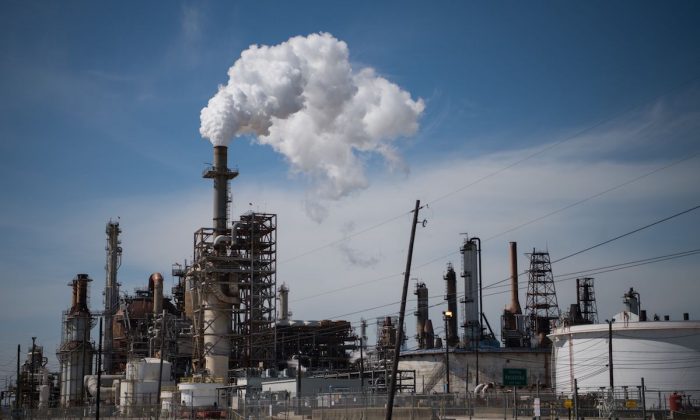 The LyondellBasell refinery near the Houston Ship Channel, part of the Port of Houston, Texas, on March 6, 2019. (Loren Elliott/AFP/Getty Images)
Commodities

American energy producers are being incentivized to boost production, as high fuel prices, strong demand, and a tight supply chain at the start of the summer driving season raise the chance of increased profits margins this year, Bloomberg reported.

Global crude oil prices have been fluctuating between $100-120/bbl since the conflict in Ukraine erupted in late February, with average gas prices across the U.S. reaching record highs.

Operators are gearing up as quickly as possible to increase supplies of gas, even as feedstock shortages, maintenance problems, and the upcoming hurricane season threaten production.

Domestic refineries were already operating at an overall refinery utilization rate of 91.8 percent for the week ending May 13.

Tighter energy supplies are the primary factor encouraging higher run rates this season, with the U.S. Gulf Coast and Eastern Seaboard having the highest run rates in the country at 95 percent, facing what is expected to be the strongest seasonal spike since before the pandemic curtailed demand in 2020.

Distillate inventories fell to their lowest levels in 17 years this spring, while gasoline stockpiles are facing the worse shortages since the 4th Quarter of 2021, said Bloomberg.

Strong domestic and export demand and record margins this year have encouraged refiners to maximize diesel output, but production focus is likely to shift more toward gasoline this summer before switching back for the winter.

Many companies are behind schedule in ramping up production at several sites after facing delays following a heavy winter-spring turnaround season that is expected to go into June in some areas.

Exxon Mobil’s Baton Rouge refinery is expected to be down until at least early June, after a sudden loss of steam power over the weekend, said Bloomberg.

A large stretch from the Great Lakes to the West Coast is facing the possibility of blackouts this summer, as the strained North American electric grid faces the combined stress of heat, drought, off-line power plants, and supply-chain shortages.

The power industry in much of the United States and Canada is facing heightened demand back to pre-pandemic levels, while the Gulf Coast is heading into the hurricane season, which may knock some energy facility production off-line.

Meanwhile, the Permian’s western Delaware sub-basin in southeast New Mexico and West Texas have become the top-producing and fastest-growing oil and gas region in the country, according to Rystad Energy, an international energy analysis firm, the Carlsbad Current Argus reported.

The Permian basin is expected to produce an average of up to 5.7 million barrels of oil equivalent per day this year, growing by about 900,000, with most of the growth reflected in rigs based in the states of Texas and New Mexico.

The basin added eight rigs to production last week, for a total of 343 rigs, with New Mexico at 98 rigs, up from 26 rigs in the past year, while Texas added 12 rigs for its total of 357.

“The Permian Delaware has emerged as the top oil-producing play in the U.S. shale patch, outpacing growth in other oil-rich regions,” said Veronika Meyer, vice president of Rystad.

“With oil prices expected to remain elevated, 2022 promises to be another outstanding year for production growth in the region.”

Further growth in the region is anticipated as oil and gas producers are expected to break production records this year due to skyrocketing demand, said Meyer.

The Current Argus also reported that two Permian Basin fossil fuel producers, Centennial Resource Development and Colgate Energy, had recently merged in a $7 billion deal that would see the newly enlarged operator focused on the western side of the Permian basin along the New Mexico-Texas border, bringing total land managed in the region to 220,000 net acres.

Over the past two years, more than 1.2 million barrels of daily refining capacity in the United States were removed from production due to government policies encouraging a push from petroleum-based fossil fuels toward green energy and in addition to the rising costs of upgrading facilities to meet stricter environmental standards.

However, the demand for oil is expected to wane later in the year as high gas prices coupled with rising interest rates start to dampen economic growth, according to the US Energy Information Administration (EIA) in May, which reduced its 2022 global oil and fuel consumption forecast to 99.6 million b/d, down about 1 million b/d from its estimate at the start of the year.