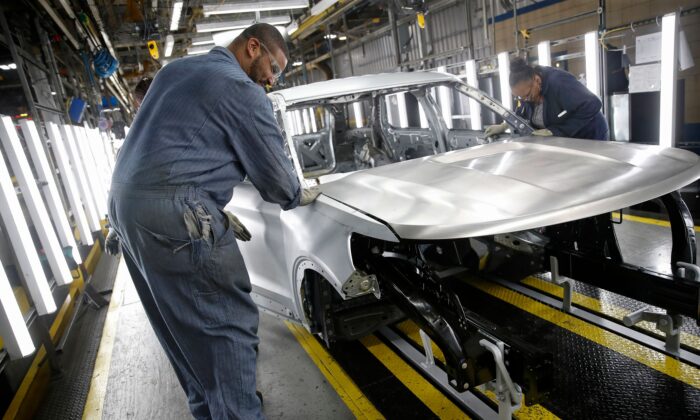 Private sector employment in the United States rose by 374,000 in August, sharply undershooting consensus expectations of 613,000, according to Sept. 1 payroll data from the Automatic Data Processing (ADP) Research Institute.

While differences in methodology mean there’s a weak correlation between ADP employment data and the Labor Department’s closely watched nonfarm payrolls report, due Sept. 3, the release of ADP data can move markets as investors look to it as a gauge of labor market strength.

The release of ADP’s jobs numbers put some immediate bearish pressure on the greenback, with the DXY dollar index seeing a relatively sharp drop, down 0.19 percent intraday to 92.46, at the time of reporting.

“Our data, which represents all workers on a company’s payroll, has highlighted a downshift in the labor market recovery,” Nela Richardson, chief economist at ADP, said in a statement. “We have seen a decline in new hires, following significant job growth from the first half of the year.”

While the ADP figures may point to a weaker nonfarm payrolls number, so far in 2021, ADP has undercounted the Labor Department’s job creation data by an average of around 122,000 per month.

“Last month’s number was low and the official Friday figure was 943k. So take ADP with a grain of salt,” analyst Edward Harrison wrote in a tweet. “But two bad prints in a row is a bad sign.”

Last month’s nonfarm payrolls report showed that America’s private employers in July added 943,000 jobs, topping the 850,000 jobs U.S. employers added in June. Ahead of that data release, economists’ estimates varied widely—from 350,000 to as much as 1.6 million, according to a Reuters review of institutional forecasts.

Dow Jones economists predict that the Sept. 3 nonfarm payrolls data will show 750,000 jobs created in August and the unemployment rate falling to 5.2 percent.

Much attention is focused on the labor market as the jobs recovery is a key factor playing into the Federal Reserve’s expected plan to taper its massive bond-buying program of around $120 billion in monthly purchases of Treasury and mortgage securities.

While economic output has fully bounced back to its pre-pandemic levels, the labor market recovery is trailing. After shedding over 22 million jobs in the first two months of the pandemic, the U.S. economy has since recovered nearly 17 million jobs.

Another sign of a bumpy road to labor market recovery came in the form of last week’s jobless claims data. It showed that the number of American workers filing for unemployment edged up following four consecutive weeks of declines. First-time filings for unemployment insurance, a proxy for layoffs, came in at 353,000 for the week ending Aug. 21, a rise of 4,000 from the previous week’s revised level of 349,000, the Labor Department said in a statement (pdf).

Weekly unemployment claims surged to a record high of 6.2 million in April 2020, when lockdowns amid the COVID-19 outbreak shook the economy. For the most part, weekly initial claims numbers have fallen steadily since then, remaining relatively flat at the mid-to-high 300,000 range since June, a historically elevated level. Before the pandemic, weekly unemployment filings averaged around 220,000.

American businesses posted a record 10.1 million job openings in June, faster than applicants were showing up to fill them. In the face of business hiring difficulties, some two dozen states have moved to end early their participation in the extended federal unemployment programs. These programs are scheduled to expire on Sept. 6 in all states.