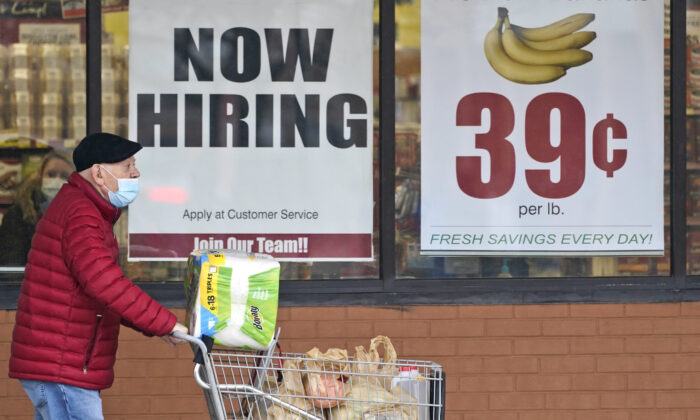 The Labor Department’s jobs report, released Sept. 3, shows that non-farm payroll employment rose by 235,000 in August, down from an upwardly revised 1.05 million jobs added in July and far below the FactSet-provided consensus forecasts of 750,000.

“With a big shortfall in jobs creation or recovery in August, it appears the Delta variant has infected the U.S. economy. Payrolls growth came in well below expectations and at the lowest level since January,” Bankrate senior economic analyst Mark Hamrick said in an emailed statement to The Epoch Times.

Other highlights of the jobs report, which is closely scrutinized by investors, include a drop in the national unemployment rate from 5.4 percent in July to 5.2 percent in August, while the total number of unemployed people edged down to 8.4 million. Also, there was no spike in temporary layoffs and the labor participation rate held steady at 61.7 percent in August.

Immediately after release of the report, the benchmark 10-year Treasury note yield surged higher, while the DXY dollar index, which tracks the greenback’s performance against a basket of rivals, plunged. Wall Street’s main indexes retreated.

Investors are looking for clues as to when the Fed will initiate the much-anticipated rollback of its massive $120 billion in monthly purchases of Treasury and mortgage securities, one of the crisis support measures the central bank deployed last year to help lift the economy from the pandemic recession.

Looming large in this context is Friday’s jobs report, as a weak print weakens the case that enough progress has been made in the labor market recovery, potentially drawing out the timeline for a Fed decision on tapering.

“This latest employment snapshot interrupts the process of substantial further progress as called for by the Federal Reserve as it considers dialing back on boosting the economy,” Hamrick said. “The immediate question for the central bank is when to begin dialing back on monthly asset purchases as a prelude to an eventual increase in benchmark interest rates.”

“This jobs report appears to give Federal Reserve officials some more time to decide or begin,” Hamrick added.

The labor market remains the key touchstone for the Fed, with Federal Reserve chair Jerome Powell hinting at the Jackson Hole Symposium last week that reaching full employment was a pre-requisite for the central bank to start trimming asset purchases.

The Fed’s bond-buying program, along with dropping the benchmark interest rate to near zero, have led to a sharp expansion of the money supply, boosting the economic recovery, buoying markets, and contributing to inflationary pressures.

Speaking at the Jackson Hole symposium last week, Powell acknowledged a “sharp run-up in inflation,” though pointed to signs that upward price pressures were moderating.

He struck a largely dovish tone, saying the central bank would continue buying bonds at the current pace until “we see substantial further progress” toward the Fed’s dual goals of price stability and maximum employment. Powell noted that the “substantial further progress” test had been met for inflation and that there had been “clear progress” toward the maximum employment objective, but struck a cautionary tone around labor market recovery in the face of rising CCP (Chinese Communist Party) virus infections.

Powell said that if further signs confirm the strength of the labor market recovery, this could make it “appropriate to start reducing the pace of asset purchases this year,” with some analysts predicting a possible announcement as soon as during the Fed’s next policy meeting over Sept. 21–22.

Friday’s disappointing jobs report is likely to prompt a revaluation of tapering expectations.

Former Atlanta Federal Reserve president, Dennis Lockhart, on Thursday predicted that the Fed would likely make a taper announcement at its policy meeting in November and begin the process a month later. However, he noted there was a risk to this outlook, in particular around the impact of the spread of the Delta variant on the labor market, with signs of weakness in the jobs recovery undermining the case for a quick taper.

“If we have a particularly bad next two months, it wouldn’t totally surprise me that they delayed the tapering decision. But as of now, it does not look like the base case,” Lockhart said of the possible consequence of soft labor market data on Fed policy, with the former central bank official making the remarks during a question and answer session at the Reuters Global Markets Forum (pdf) on Sept. 2.