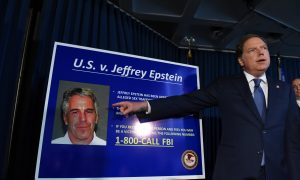 Police Arrest 11 in International Child Trafficking Bust—American, Australian Among Them

Police in Georgia dismantled a child-trafficking ring that exploited girls as young as 8 to produce pornographic material, in what authorities said on Sept. 19 was the largest operation of its kind in the country.

Among the 11 people detained were a U.S. and an Australian citizen as well as parents, relatives, and acquaintances of some of the up to 10 girls involved, the Georgian interior ministry said in a statement.

Helped by local accomplices, the two foreign nationals, identified only by their initials as K.U., 58, and P.L., 60, had set up photo salons in rented apartments in the capital of Tbilisi.

The arrests came as part of a joint operation with Europol, U.S. and Australian law enforcement agencies that Georgian interior ministry spokeswoman Elza Japoshvili said was the biggest of its kind to date in the former Soviet republic.

“The disruption of this syndicate will have a significant effect on the production and distribution of child exportation material both in Georgia and internationally,” Wendy Rix, of the Australian Federal Police told a news conference Tbilisi.

The suspects faced up to life in jail on charges of child trafficking and producing and selling child pornography, the interior ministry said.

The girls involved, aged between 8 and 14, were receiving psychological assistance, it added.

Anti-trafficking groups said the case was symptomatic of a growing global problem.

“International networks are taking advantage of vulnerable families, using young people, taking pictures of their sexual abuse and sharing or selling the images around the world,” said Carol Smolenski, director of ECPAT-USA.

“Since the creation of the digital camera and the internet, a problem that was small and controllable has exploded … It is an invisible crisis that every government and every citizen must start to grapple with.”