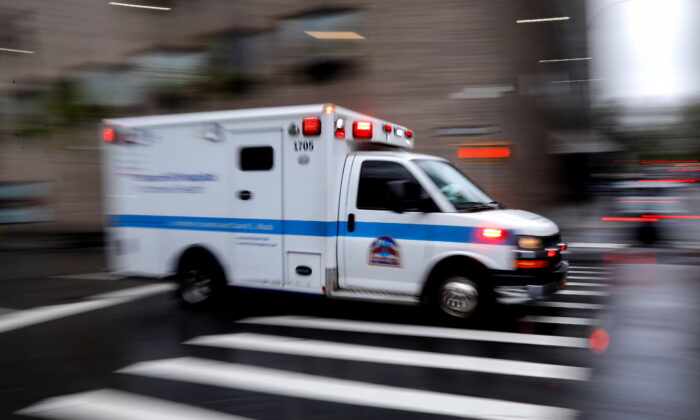 An ambulance arrives at the emergency entrance outside Mount Sinai Hospital in New York on April 13, 2020. (Mike Segar/Reuters)
US

The American Ambulance Association has warned that the nation is facing a “crippling workforce shortage” that threatens to undermine the 911 emergency services amid an unsustainable turnover rate of staff.

According to the AAA/Avesta 2019 Ambulance Industry Employee Turnover Study, turnover among emergency medical technicians (EMT’s) and paramedics was in the 20 to 30 percent range annually, which effectively equates to a 100 percent turnover over a four-year period.

“With percentages that high, organizations are looking at replacing most of their workforces within a four-year period,” the study notes. “Also, at a national level, turnover has been trending upward since 2008.”

“The voluntary turnover rates should remain an area of concern. Since EMTs and paramedics are on the front lines, delivering healthcare services to clients and patients, the high rate of voluntary turnover for these jobs is a critical issue, as is the high rate of overall turnover. This is especially true of part-time EMTs and paramedics,” the study adds.

According to the AAA survey of 258 EMS organizations across the country, in 2020,  nearly a third of the workforce left their ambulance company after less than a year while 11 percent left within the first three months, NBC reported.

President of the American Ambulance Association Shawn Baird told Fox News earlier this month that the problem has been exasperated by a lack of funding and ongoing pressures from the COVID-19 pandemic.

“This has been a problem that has that been developing over several years because of chronic underfunding shortfalls from Congress for ambulance services, but certainly during the pandemic things have hit a crisis level,” Baird said.

“We’ve seen a tremendous amount of workforce attrition and schools had shut down paramedic training institutions and stopped graduating new students for the last year so we’re suddenly in a severe shortfall,” he added.

The association president noted that ambulance employees and emergency medical technicians are under immense stress in the workplace, explaining, “this is a very high stress job and some people don’t realize what they’re getting into.” He said some leave the service due to more lucrative career opportunities.

Baird noted that those employees who do not leave their roles are “under an incredible workload,” due to a multitude of stresses from the pandemic, as well as wildfires and other natural disasters.

“A number of paramedics and others are just saying they’ve reached the end of their limit because they’re working a lot of overtime when other people have left the field and they’re leaving as well, taking other opportunities,” Baird said.

“Half of the people who leave don’t leave to go to another employer, they leave the field entirely,” he continued. “So we have to reverse that trend. We have to basically stop the bleed of our own employees.”

Baird said the association has a number of solutions that it will be putting forward to Congress in an effort to tackle the crisis, including a bonus scheme for workers “that are sticking with the field” and have “bore the brunt of this last year.”

He pointed to Florida, where Gov. Ron DeSantis in May announced $1,000 one-time bonuses for approximately 174,000 first responders, including law enforcement officers, paramedics, EMTs, and firefighters across the state.

Baird added that training and workforce development programs need to be “up and running” and that Congress needs to “cut the red tape hearing” so that ambulance staff can tell them what the “barriers are to our success and get some action.”

Earlier this month, the American Ambulance Association sent a letter to lawmakers in Congress detailing their solutions and calling on them to take urgent action and develop long-term solutions to tackle the worker shortage crisis.