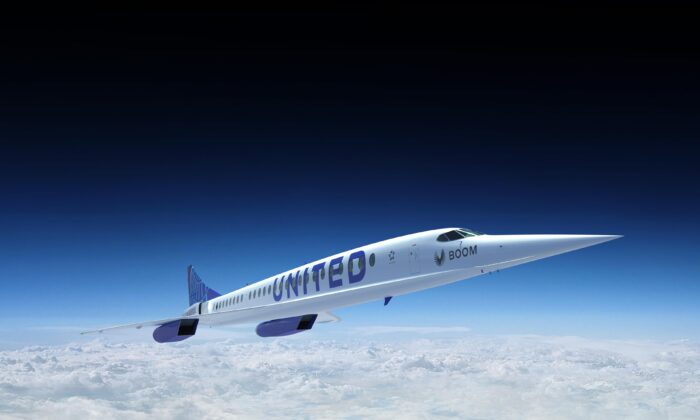 American Airlines announced that it has agreed to purchase 20 supersonic Overture planes from Boom Supersonic, both companies said on Aug. 20.

American also paid an undisclosed amount as a nonrefundable deposit for the order, which it could expand to an additional 40 supersonic planes.

The new supersonic airliner design, which has not gone into production, is the second commercial triumph for the startup, after United Airlines committed to buying 15 of the jets in June 2021, with an option to acquire 35 more.

“We are proud to share our vision of a more connected and sustainable world with American Airlines,” said Boom CEO Blake Scholl in a statement.

“We believe Overture can help American deepen its competitive advantage on network, loyalty, and overall airline preference through the paradigm-changing benefits of cutting travel times in half.”

Japan Airlines and the U.S. Air Force have also placed orders for the plane.

Almost Twice the Speed of Sound

The Colorado startup announced in 2018 that it was seeking to recreate a supersonic commercial jetliner design that most resembled the experience of the Concorde, with a 65–80-seat capacity, at an average speed of Mach 1.7, or 1,304 mph.

Last month, Boom announced changes to the plane’s design to make it simpler and less expensive to build and maintain, and increased the amount of engines to four under delta-shaped wings.

The Overture does not yet have an engine manufacturer lined up, but it may potentially use a design from Rolls Royce or others.

A few years ago, after the Federal Aviation Administration (FAA) eased some of its regulations regarding supersonic flight, a few aviation startups like Boom announced new supersonic aircraft designs using modern technologies that would make it  more affordable to the average commuter.

However, the Concorde was too expensive for most travelers to afford, which severely limited its customer base.

The new aircraft is designed to cater to business-class travelers, with tickets expecting to cost $4,000–5,000.

The Overture, which is still in the design phase, is allegedly capable of traveling roughly twice the speed of the fastest conventional commercial aircraft while over water, dramatically cutting trans-Atlantic and trans-Pacific flight times.

“Passengers want flights that are faster, more convenient, more sustainable, and that’s what Overture delivers,” said Scholl, in an interview with CNBC.

“Flight times can be as little as half as what we have today, and that works great in networks like American, where we can fly Miami to London in less than five hours.”

The Overture is designed with a range of 4,250 nautical miles and is able to make the flight from Miami to London in less than five hours, versus nine hours with subsonic planes.

A flight from Seattle to Tokyo, which normally takes more than 10 hours, could be completed in six hours.

Boom also boasted that the Overture is a net-zero carbon aircraft, which can fly on 100 percent sustainable aviation fuel.

“Looking to the future, supersonic travel will be an important part of our ability to deliver for our customers,” said Derek Kerr,  American’s chief financial officer, in a statement.

“We are excited about how Boom will shape the future of travel both for our company and our customers.”

Boom is planning to build the jet at a new manufacturing plant in North Carolina, and the program is estimated to cost between $6 billion and $8 billion, with each new plane at a list price of $200 million.

The company said it is planning to launch the Overture in 2025, with its first flight scheduled for 2026.

If the Overture passes its flight tests and certifications as planned, it will be able to enter commercial service and carry its first passengers by 2029.