‘America Needs to Lead the World’ in Ending the Persecution of Falun Gong: Pompeo 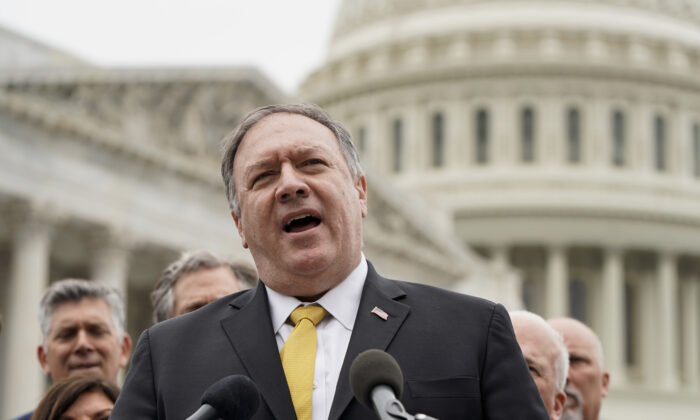 Former Secretary of State Mike Pompeo speaks to the media with members of the Republican Study Committee about Iran in Washington on April 21, 2021. (Joshua Roberts/Getty Images)
By Eva Fu

The United States should help bring an end to the Chinese regime’s “horrific” persecution of Falun Gong so adherents can exercise freedom of belief, former Secretary of State Mike Pompeo said as Beijing’s brutal campaign marks its 22nd year.

Pompeo spoke to NTD, a sister media of The Epoch Times, on the eve of the anniversary of the start of the persecution.

“With respect to Falun Gong,” he said, “the absence of religious freedom in China is horrific, it is tragic, it’s gone on for too long and America needs to lead the world to ensure that those people have the opportunity to practice their faith in the way they want to.”

Falun Gong, a meditation discipline that espouses the values of “truthfulness, compassion, and tolerance,” was first introduced in northern China in 1992, and won broad appeal among the Chinese public for its health benefits. However, threatened by its popularity, the Chinese Communist Party (CCP) launched an eradication campaign targeting Falun Gong on July 20, 1999.

The entire state apparatus was turned against the practice’s adherents, which by official estimates numbered 70 million to 100 million at the time.

Practitioners over the past two decades have become targets of prolonged imprisonment, slave labor, torture, psychiatric and sexual abuse, and forced organ harvesting for persisting in their faith.

In connection with the July 20 anniversary, at least 15 U.S. lawmakers issued letters, proclamations, or video messages in support of Falun Gong, as well as an international coalition of politicians from 20 countries. The State Department also called on the CCP to “immediately cease” its long-running campaign and release all jailed adherents.

“No one should have to face prison, torture, or worse simply for how they choose to practice their religion,” Sen. Bob Menendez (D-N.J.), chairman of the Senate Foreign Relations Committee, said in a statement.

“[I]t truly is a violation of human rights at the highest level,” Hartzler wrote in a letter.

Regarding the crime of forced organ harvesting, Hartzler noted that a 2016 House resolution (H.Res. 343) condemning the grisly practice was “a step in the right direction.” But “more must be done,” she said. The congresswoman is one of 17 lawmakers who sponsored the Stop Forced Organ Harvesting Act of 2021 (H.R. 1592) to combat the issue.

“There are few worse crimes that can be imagined,” Rep. Steve Chabot (R-Ohio) wrote in a letter, referring to organ harvesting. “This unspeakable crime demands justice for the countless victims who have suffered at the hands of the CCP.”

Sen. Marco Rubio (R-Fla.) released in a statement on July 20 “in commemoration of the fallen victims” under the ongoing persecution of Falun Gong.

“The CCP has detained Falun Gong practitioners, and in some cases, multiple times, in ‘transformation-through-reeducation’ centers—a preview of the ongoing mass internment and acts of genocide against Uyghurs and other Muslims in Xinjiang,” he said.

The persecution has continued unabated amid the pandemic, with close to 9,500 adherents experiencing police harassment, arrests, or police raids during the past half-year, according to Minghui.org, a U.S.-based website dedicated to documenting the persecution.

The suppression has hit close to home for those who have family back in China.

Zhou Deyong, whose wife and son live in Florida, has been held in detention in eastern China’s Shandong Province for months. He was accused of “sabotaging the enforcement of the law” after police broke into his home and found Falun Gong books and booklets belonging to his wife, also a Falun Gong practitioner.

Deng Cuiping from Yunnan Province, mother of another Florida resident, was arrested in 2016 along with another four practitioners for sharing informational materials about the persecution. Deng, who was jailed for three years previously and fired from the primary school where she taught, is currently serving a six-year sentence after being held for eight months without trial.

“The Falun Gong practitioners like my mother are sincere and kind and never hurt anyone. Why do they have to give up six years of their life or longer just to uphold their conscience and belief?” Deng’s daughter, Iris Lu Wanqing, an accountant in Temple Terrace, Florida, told The Epoch Times in 2019.

“Our world would surely be a more peaceful one if we centered those values in our daily lives,” said Rep. Dean Phillips (D-Minn.).

Rep. Gus Bilirakis (R-Fla.), who wrote a letter to Beijing authorities concerning Zhou’s plight, said he plans to introduce another resolution to “highlight the particularly egregious nature” of the eradication campaign.

“If we remain silent in the face of these transgressions, we neglect that moral imperative and do so at the peril of civil society,” he said in a pre-recorded speech.