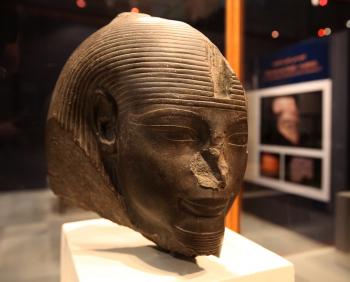 The Head of Amenhotep III, from the New Kingdom, Dynasty 18, is displayed at new exhibition at the Egyptian Museum in Cairo. Inside of Amenhotep III's tomb, a large statue of Thoth was discovered this week in Luxor, Egypt. (Victoria Hazou/Getty Images)
Middle East

Inside Amenhotep III’s tomb, a large statue of Thoth was discovered this week in Luxor, Egypt.

Archaeologists led by Dr. Zahi Hawass also found a well-preserved stone head of Amenhotep III, which still depicts much of the pharaoh’s face.

The temple was built close to a floodplain near Thebes and two other large statues known as the Colossi of Memmon, which are 60-foot-high depictions of the pharaoh.

Scientists suspect that Amenhotep III, a pharaoh that lived between 1390 BCE and 1352 BCE, was the grandfather of the young king Tutankhamun, or King Tut for short.

The latest finding was discovered during “routine excavations” conducted by an Egyptian achaelogical crew. Dr. Hawass said more statues would likely be found, according to a statement. Last year, a 17-foot-tall statue was found in a nearby location.

Approximately 200 years after its construction, Amenhotep III’s temple collapsed. However, more excavations could yield “an avenue of Thoth statues that once outlined the original path leading to the temple,” according to the statement.