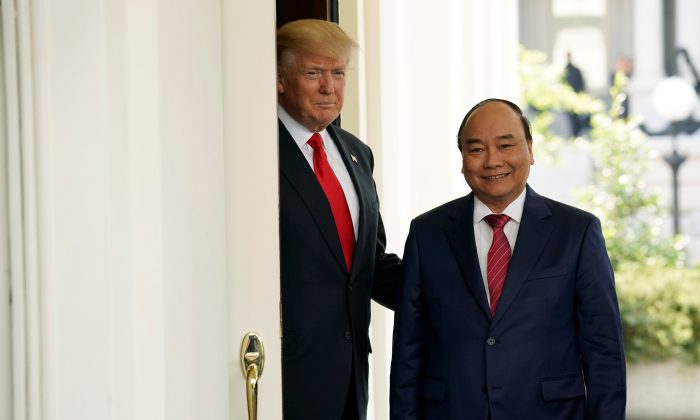 Phuc’s trip included a meeting with President Donald Trump Wednesday afternoon at the White House as well as the signing of deals with U.S. companies for high-tech goods and services worth $15 billion to $17 billion when GE and Caterpillar are included.

The U.S. wants “Vietnam to bring some ideas about how to tackle the surplus on an ongoing basis,” said Murray Hiebert, a Southeast Asia expert at the Center for Strategic and International Studies, referring to the multibillion-dollar trade surplus that Vietnam runs annually with the United States.

“I heard from U.S. officials ahead of the trip that just signing deals with U.S. companies was nice but not enough.”

General Electric said on Wednesday it had signed deals in Vietnam worth about $5.58 billion for power generation, aircraft engines and services, its largest single combined sale with the country in GE’s history.

Trump Hails Signing of Deals Worth ‘Billions’ With Vietnam

Caterpillar and its dealer in Vietnam, Phu Thai Cat, agreed to provide generator management technology for more than 100 generators in Vietnam, the company said. The technology would allow for remote function monitoring including fuel, temperature and pressure. The value of the Caterpillar deal was not disclosed.

GE’s shares ended regular trading on Wednesday up 2 cents at $27.38 on the New York Stock Exchange. Caterpillar shares finished down 4 cents at $105.43, also on the NYSE.