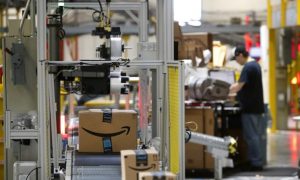 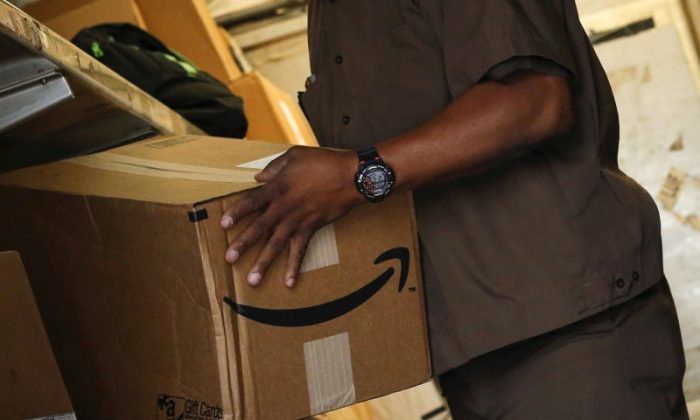 A UPS worker carries an Amazon box to be delivered in New York, on July 24, 2015. (Reuters/Eduardo Munoz)
Companies

U.S. stocks rose for a third straight day on Jan. 8 and the S&P 500 touched three-week highs, once again led by Amazon and a rally in industrials on hopes that the United States and China would strike a deal to end a trade war.

The rally, sparked Jan. 4 by a robust U.S. jobs data and dovish comments on interest rates by Federal Reserve chief Jerome Powell, has lifted the S&P by over 9 percent from the 20-month lows hit around Christmas.

The trade talks will continue for an unscheduled third day on Jan. 9, when a statement is likely to be issued. So far, officials from both sides have sounded optimistic, with President Donald Trump saying talks were going well.

“You’re seeing some negotiations happen and the market is starting to think that perhaps we’ll start to see a framework evolve,” said Anik Sen, global head of equities at PineBridge Investments.

The trade-sensitive S&P industrials sector rose 1.05 percent. Boeing Co. jumped 3.2 percent after reporting it had delivered record 806 aircraft in 2018 and contributed most to the Dow’s rise.

But the biggest support came from the consumer discretionary sector’s 1.05 percent rise.

Amazon.com Inc. again led the advance with a 1.7 percent rise that took its market capitalization above $800 billion, cementing its position as the most valuable U.S. company.

Financials was the only S&P sector to log losses, led by bank stocks that fell 0.91 percent as the U.S. Treasury yield curve flattened.

“What’s been notable about the last week is that even as the broader market rallied, the yield curve really hasn’t steepened much,” said Christopher Verrone, partner and head of technical and macro research at Strategas in New York.

“The flattening of the curve again today is likely another macro headwind for financials, and banks in particular.”

Gains in Apple Inc. and Microsoft Corp. pulled the technology sector up 0.51 percent, but the gains were limited by a drop in chip stocks after Samsung blamed its profit drop on weak chip demand.

The Philadelphia Semiconductor index dropped 1.16 percent. Adding to the woes, Goldman Sachs forecast a tough year for chipmakers, particularly in the first half.

The S&P index recorded no new 52-week highs and one new low, while the Nasdaq recorded 23 new highs and 13 new lows.