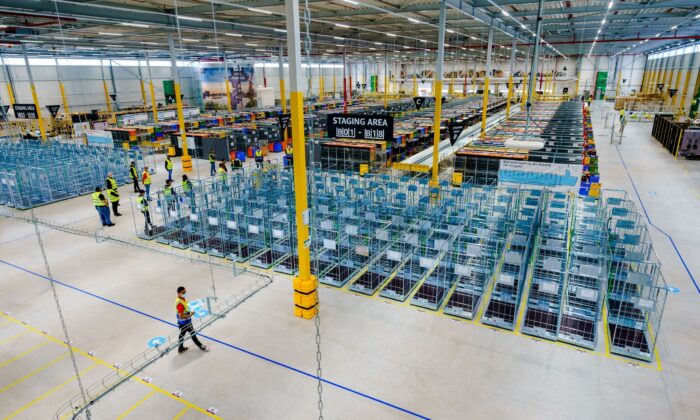 The new delivery warehouse of the US e-commerce company Amazon in Rozenburg-Schiphol, Netherlands, on July 13, 2021. (Marco de Swart/ANP/AFP via Getty Images)
Europe

Amazon.com Inc looks to shut down its gig economy delivery service in Germany, its second-largest market after the U.S., for undisclosed reasons, Bloomberg reports.

Uber’s Flex program, which signed off in the U.S. in 2015 before expanding to Germany two years later, paid drivers to ferry packages in their vehicles from Amazon warehouses to customers’ homes.

Bloomberg notes Amazon assured assisting the former Amazon Flex delivery partners in finding other opportunities across Amazon’s operations in Germany, including the DSPs.

The DSP network was capable of absorbing “the very small portion of deliveries that Amazon Flex has been making.”

Amazon has 67 delivery stations in Germany, up from 10 before the pandemic began, as it doubled its warehouse capacity during the pandemic to tap the budding demand.

Amazon has started weighing alternatives to cut down on its CAPEX as it reported its first quarterly loss in seven years amid pandemic recovery. It acknowledged being overstaffed with an excess of warehouse space.