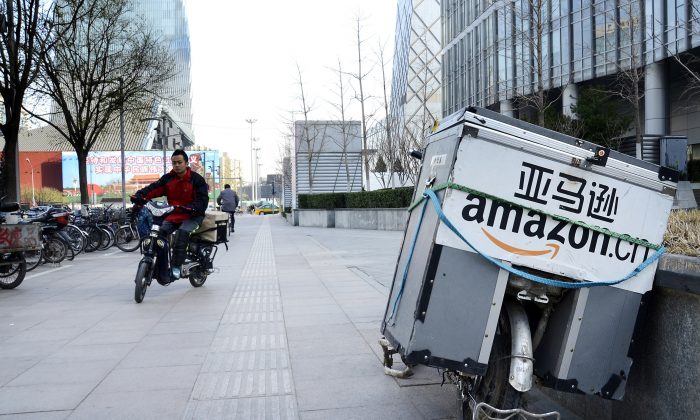 An electric bike (R) used by Amazon sits parked along the pavement at a central business district in Beijing on November 29, 2012. (WANG ZHAO/AFP/Getty Images)
China

Amazon, the world largest internet retailer, shuffled its Chinese business recently, not to combat poor performance, but to crack down on bribery among its employees in the country. Reports say that its independent sellers paid employees for customers’ data as well as deleting negative reviews, and the like.

Amazon China, by contrast, only has 0.8 percent of the market with about $300 million in revenue. This contributed only 1.6 percent of its total revenue in 2017.

However, 34 percent of top Amazon independent sellers are based in China according to a market report of Marketplace Pulse, who sell cheap Chinese products to Amazon customers globally.

Amazon has around five million sellers across 12 marketplaces. About one million of them are new members that joined this year, according to Feedback Express. Bribery may have resulted in Chinese suppliers seeing the greatest successes.

Wall Street Journal reported on Sept. 16 that Amazon started an investigation in May regarding bribery among its employees in China and other countries. Some employees sell company data to third parties.

To get into this threshold, the seller should improve the product’s name and description, select the right keywords, increase the sales volume, make sure there are no negative reviews, and so on.

Although Amazon has a strict requirement for integrity, Chinese suppliers have been bribing the company’s staff to boost their product’s rankings.

According to the report, a seller can pay $80 to $2000 via intermediaries to buy confidential data from Amazon, including customers’ email addresses and lists of popular keywords. For the right price, a seller can even restore banned accounts.

The report said that there are employees from China and other countries involved in those briberies. Following this exposure, Reuters quoted an Amazon’s spokesperson on Sept. 17 as saying that “we hold our employees to a high ethical standard and anyone in violation of our code faces discipline.”

But Amazon China has been struggling. Its market share declined from 20 percent to 0.8 percent in the past 14 years. Both of the number of its employees and the capacity of its warehouses have halved.