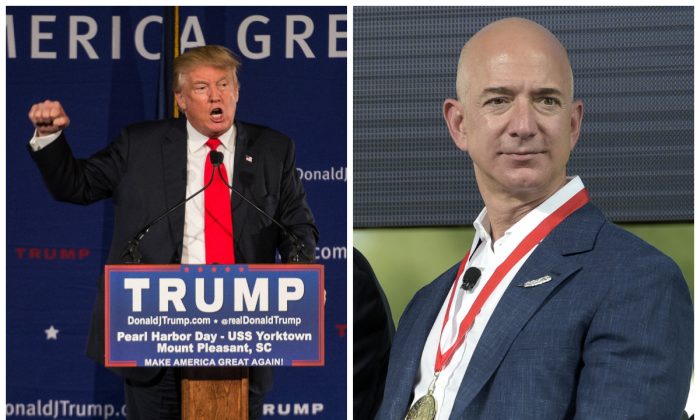 Amazon Founder Jeff Bezos Responds to Trump’s Criticism With Offer: ‘Will Reserve Him…’

Amazon founder and Washington Post owner Jeff Bezos responded to criticism from presidential candidate Donald Trump with an offer to send him into space.

About an hour before Trump began his tirade targeting Bezos on Twitter, the Post published an article likening Trump to the infamous “gamergate.”

Trump said that Bezos appears to be using the Post as a tax shelter.

“The @washingtonpost, which loses a fortune, is owned by @JeffBezos for purposes of keeping taxes down at his no profit company, @amazon,” he wrote on Twitter.

“The @washingtonpost loses money (a deduction) and gives owner @JeffBezos power to screw public on low taxation of @Amazon! Big tax shelter. If @amazon ever had to pay fair taxes, its stock would crash and it would crumble like a paper bag. The @washingtonpost scam is saving it!”

Bezos later responded by noting he was “finally trashed” by Trump.

“Will still reserve him a seat on the Blue Origin rocket,” he added.

Bezos also has a spaceflight company, Blue Origin, which recently successfully demonstrated its resusable rocket for the first time.

In the company’s announcement of the flight, Bezos wrote that people will soon “”be able to climb aboard New Shepard and come home and astronaut.”