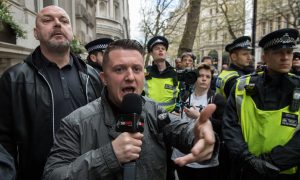 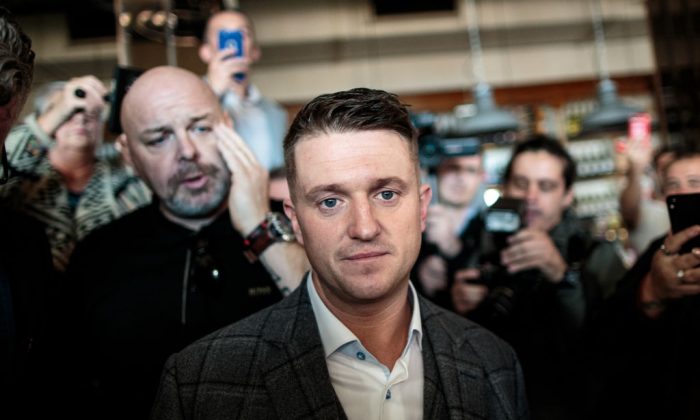 Tommy Robinson (C), real name Stephen Yaxley-Lennon is surrounded by supporters and media in a bar after his case was adjourned in London, England, on Sept. 27, 2018. (Jack Taylor/Getty Images)
Europe

Amazon is being accused of censorship after recently removing a book co-authored by British anti-Islamic activist Tommy Robinson.

The book, titled “Mohammed’s Koran: Why Muslims Kill for Islam,” was released in July 2017, before going on to become an Amazon best-seller for a short period. Peter McLoughlin, Robinson’s co-author, says Amazon banned their book and “deleted it from their database,” meaning that even second-hand copies can’t be sold through the platform.

“This title is not currently available for purchase,” Amazon’s website now says.

The joint scholarly work, which contains the entire unedited text of the Koran—the main religious text of Islam—explains the “pervasive and perennial problem of Islamic terrorism,” according to the authors.

McLoughlin argues that no other scholarly book on Islam has been banned by Amazon before, noting that Adolf Hitler’s “Mein Kampf” and the terrorist manual “The Anarchist Cookbook” remain for sale on Amazon’s online store.

“This is the twenty-first century equivalent of the Nazis taking out the books from university libraries and burning them,” McLoughlin wrote in an email posted on the blog Brian of London.

McLoughlin accuses Amazon of removing the book without an explanation, and says the company has refused to reinstate it.

“I can’t get my head around it. Every few weeks for the past 18 months, they had emailed me asking to put it into special sales programs, as it was selling so well,” he wrote. “For 18 months, they sought to profit even more from the sales.”

Conservative blog site Jihad Watch, meanwhile, said that Amazon’s removal of the book should make people who care about the freedom of speech “extremely concerned.”

“This book is critical of the Qur’an; it calls for no violence and is not inaccurate,” the site says. “Anyone who has written a book that is critical of anything should read the writing on the wall and realize that once this censorship begins, it won’t end with Tommy Robinson or Qur’an-critical books.”

Robinson has been permanently banned from Facebook and Instagram for posts that the platforms said violated their policies on “hate speech.”

“He has also behaved in ways that violate our policies around organized hate.”

The ban represents the latest in a series of actions taken by social media platforms to attempt to stem the flow of what they call “hate speech.”

The term is defined by Facebook as “anything that directly attacks people based on what are known as their ‘protected characteristics’—race, ethnicity, national origin, religious affiliation, sexual orientation, sex, gender, gender identity, or serious disability or disease.”

They alleged Robinson had been taking part in events with individuals they deem to be “hate figures,” such as the Proud Boys and Gavin McInnes.

However, they didn’t provide evidence or even specifics of the posts that violated their terms, and an email to their press team to clarify the matter at the time went unanswered.

John Smithies contributed to this report.