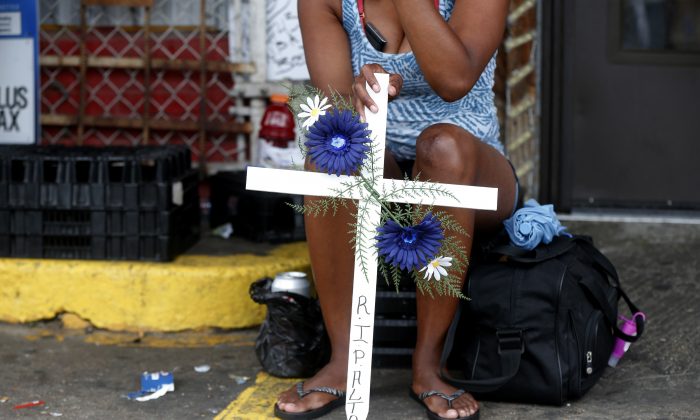 Alton Sterling, the man who was killed in a police-involved altercation last week, had a similar encounter with police officers in 2009.

According to an exclusive report from Louisiana broadcaster WAFB, Sterling, 37, was arrested in an “eerily similar” manner. He fought with Baton Rouge police officers outside of a convenience store while he was selling CDs and carrying a gun, according to a May 29, 2009, police report.

In the 2009 incident, an officer was dispatched to the scene after receiving a complaint about someone “on the corner selling CDs” who pulled a gun on someone. The officer arrived on the scene and spotted Sterling, who was carrying a crate filled with CDs.

He asked Sterling to place his hands on the hood of his police car. When he asked him if he had weapons on him, Sterling didn’t answer, according to the officer. He then started reaching for his pocket.

Sterling then spun around and the two began to struggle, according to the report. Both men hit the ground. The officer then called for backup as Sterling tried to get him off.

“While wrestling with this subject on the ground a black semi auto hand gun fell from this subject waist band at this time,” the report stated, according to WAFB.

Sterling pleaded guilty to illegal carrying of a weapon with a controlled dangerous substance, and he was sentenced to five years in prison. He got out on parole on Dec. 5, 2013.

Sterling’s family attorney L. Chris Stewart addressed the reports about his past. He said it is “one of the biggest character assassination attempts on someone that I’ve ever seen,” ABC News reported.

“You can judge a man by his past, or in this case you can judge him by what we saw in the videotape,” Stewart said. “All that matters is that videotape,” he said, referring to a cell phone recording of his deadly encounter with police.

5 Things to Know About the Alton Sterling Shooting

The Department of Justice is now investigating Sterling’s shooting.