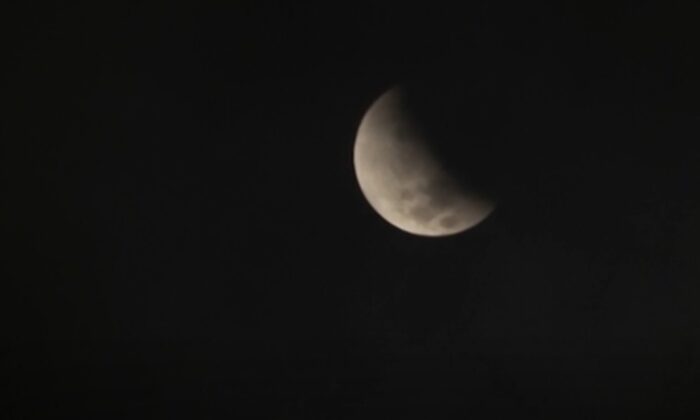 A moon eclipse early in the morning, in Mexico City, Mexico, on Nov. 19, 2021, in a still from video. (AP/Screenshot via The Epoch Times)
Science

A group of amateur astronomers braved the cold weather and gathered on a rooftop in Mexico City to watch Friday’s lunar eclipse.

Cloudy skies in the capital only allowed short glimpses of what was the longest lunar eclipse in almost 1,000 years but, every break in the clouds showed a little bit of a beautiful full moon and the slow-moving shadow of the earth.

Images from astronomy enthusiast Eduardo Mlawer showed the full picture of the eclipse, with Mlawler telling The Associated Press that he had spent “two days” preparing for the event.

Describing his process he said the days were spent “charging batteries and making sure everything works, to think about what combinations to do between telescope and lenses”.

But despite his preparations, he explained: “at the end of the day it’s not up to us—weather, it’s a pretty decisive factor.”

North America was considered amongst the best places on earth to see the three-and-a-half hours long eclipse, with chances to see it in full from Central America.