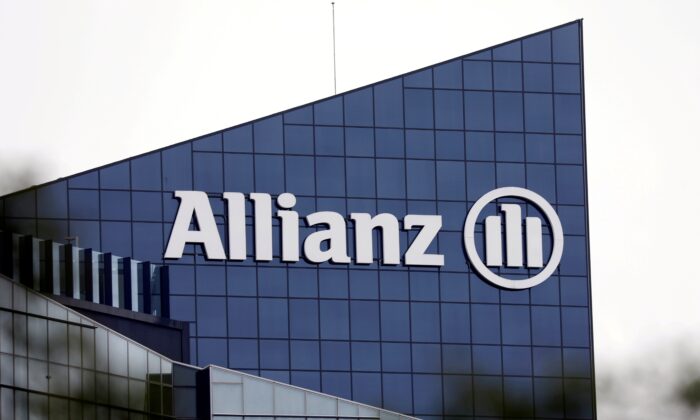 The logo of insurer Allianz SE on the company building in Puteaux at the financial and business district of La Defense near Paris on May 14, 2018. (Charles Platiau/Reuters)
Companies

NEW YORK/MUNICH—Germany’s Allianz SE agreed to pay more than $6 billion and its U.S. asset management unit pleaded guilty to criminal securities fraud over the collapse of a group of investment funds early in the COVID-19 pandemic.

Allianz’s settlements with the U.S. Department of Justice and U.S. Securities and Exchange Commission are among the largest in corporate history, and dwarf earlier settlements obtained under President Joe Biden’s administration.

Once with more than $11 billion of assets under management, the Structured Alpha funds lost more than $7 billion as COVID-19 roiled markets in February and March 2020.

Allianz Global Investors US LLC was accused of misleading pension funds for teachers, bus drivers, engineers, religious groups and others by understating the funds’ risks, and having “significant gaps” in its oversight.

Investors were told the funds employed options that included hedges to protect against market crashes, but prosecutors said the fund managers repeatedly failed to buy those hedges.

Prosecutors said the managers also inflated fund results to boost their pay through performance fees, with Tournant, 55, collecting $13 million in 2019 and becoming his unit’s highest or second-highest-paid employee from 2015 to 2019.

Investigators said the misrepresentations began in 2014, and helped Allianz generate more than $400 million of net profit.

At a news conference, U.S. Attorney Damian Williams in Manhattan said more than 100,000 investors were harmed, and that while American prosecutors rarely bring criminal charges against companies it was “the right thing to do.”

Investors “were promised a relatively safe investment with strict risk controls designed to weather a sudden storm, like a massive collapse in the stock market,” he said. “Those promises were lies. … Today is the day for accountability.”

Also known for its insurance operations, Allianz is among Germany’s most recognizable brands and an Olympic sponsor.

Williams said the fine was significantly reduced because of Allianz’s compensation to investors.

Even so, the payout is close to twice the $3.3 billion in corporate penalties that the Justice Department collected for all of 2021.

An Allianz lawyer entered the guilty plea at a hearing before U.S. District Judge Loretta Preska in Manhattan.

Allianz also accepted a $675 million civil fine from by the SEC, one of that regulator’s largest penalties since Enron Corp and WorldCom Inc imploded two decades ago.

Tournant, of Basalt, Colorado, surrendered to authorities on Tuesday morning.

The U.S.-French citizen appeared briefly in Denver federal court, and was released after agreeing to post a $20 million bond. An arraignment was set for June 2 in New York.

Tournant’s lawyers, Seth Levine and Daniel Alonso, said the investor losses were “regrettable” but did not result from a crime.

“Greg Tournant has been unfairly targeted [in a] meritless and ill-considered attempt by the government to criminalize the impact of the unprecedented, COVID-induced market dislocation,” the lawyers said in a joint statement.

The other two portfolio managers—Stephen Bond-Nelson, 51, of Berkeley Heights, New Jersey; and Trevor Taylor, 49, of Miami—agreed to plead guilty to fraud and conspiracy, and cooperate with prosecutors. Their lawyers declined immediate comment.

As a result, Allianz plans to move about $120 billion of investor assets to Voya Financial Inc. in exchange for a stake of up to 24 percent in Voya’s investment management unit. It expects a final agreement in the coming weeks.

Regulators said the misconduct included when Tournant and Bond-Nelson altered more than 75 risk reports before sending them to investors.

The SEC said projected losses in one market crash scenario were changed to 4.15 percent from the actual 42.15 percent, simply by removing the “2.”

Allianz’s alleged oversight lapses included a failure to ensure Tournant was hedging, though prosecutors said only people in his group knew of the misconduct before March 2020.

“No compliance system is perfect, but the controls at AGI didn’t even stand a chance,” Williams said.

Bond-Nelson, at Tournant’s direction, also lied to Allianz’s in-house lawyers after the company learned about the altered reports and the SEC probe, prosecutors added.

“Unfortunately, we’ve seen a recent string of cases in which derivatives and complex products have harmed investors across market sectors,” SEC Chair Gary Gensler said in a statement.

Investors have also filed more than two dozen lawsuits against Allianz over the Structured Alpha funds.