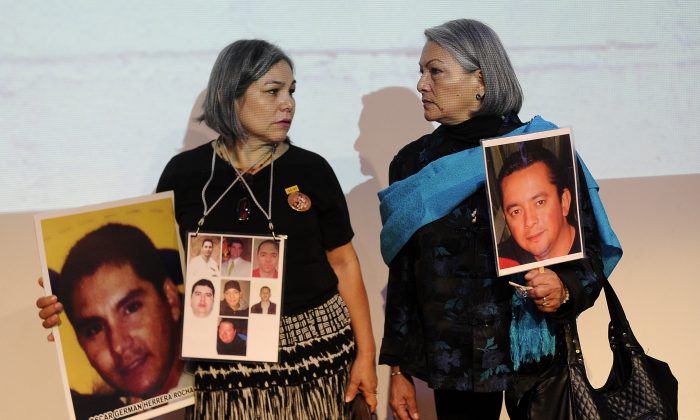 Rosario Villanueva (L) and Yolanda Moran hold pictures of their missing sons Oscar German Herrera and Dan Jeremeel Fernandez, who disappeared in 2009 and 2008 respectively, as they attend the presentation of the independent inquiry into the massacre of 72 migrants in San Fernando, Tamaulipas in Aug. 2010 and the disappearance of residents of Allende, Coahuila, in 2011, at the Museum of Memory and Tolerance in Mexico City on Oct. 9, 2016. (PEDRO PARDO/AFP/Getty Images)
Americas

MEXICO CITY—The alleged mastermind of one of the worst massacres of migrants in Mexico’s long drug war was detained on Tuesday, Nov. 14, in an operation led by federal police.

Mexican security authorities said in a statement that the suspect Martiniano de Jesús Jaramillo, Zetas Cartel regional chief, allegedly coordinated the massacre of 72 migrants in the town of San Fernando in northern Tamaulipas state in August 2010.

The 56-year-old suspect, also believed to be involved in more recent violent crimes, was detained at a hospital in Ciudad Victoria, the state capital of Tamaulipas, according to the statement.

In one of the worst atrocities in Mexico’s prolonged drug war, Zetas drug cartel gunmen were responsible for the 72 massacred bodies that were found in an empty building at a remote ranch some 90 miles (145 km) from the Texas border.

The victims were mostly Central and South American migrant workers and appeared to have been blindfolded and bound before they were lined up against a wall and gunned down.

Investigators say that the migrants were murdered because they refused to work for the Zetas cartel.

The Zetas cartel is responsible for the murder of over 350 farmers and migrant workers who refused to join their ranks from across Mexico and Guatemala in the years 2010-2011, according to Business Insider.

The Zetas cartel is one of the most ruthless and technologically savvy in Mexico. According to murder statistics from the Mexican government, the cartel has been linked to more than 179,000 murders since 2006.