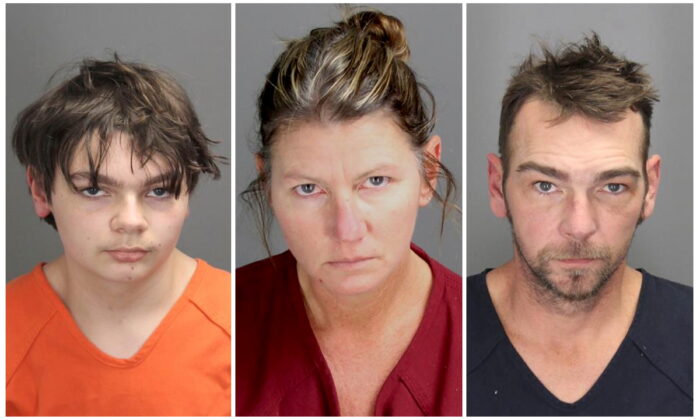 Ethan Robert Crumbley, 15, charged with first-degree murder in a high school shooting, poses in a jail booking photograph taken at the Oakland County Jail in Pontiac, Michigan, U.S. December 1, 2021, in a combination photograph with his parents Jennifer Lynn Crumbley and James Robert Crumbley who were taken into custody December 3, 2021. Oakland County Sheriff's Office/Handout via REUTERS
US News

Accused Michigan high school shooter Ethan Crumbley convinced school officials that violent drawings he made in class were of a “video game,” according to a letter released by Oxford Community Schools superintendent Tim Thorne.

Crumbley, 15, was charged with several counts of homicide and terrorism for a shooting incident last week at Oxford High School that left four students dead and more injured. His parents, James and Jennifer Crumbley, were charged with court counts of involuntary manslaughter each.

Questions arose about whether the school district was culpable after images of people being shot were drawn by the teen. Just hours before the shooting on Nov. 30, Crumbley’s parents were called in by the school to talk about the drawings, but the teen was ultimately released back to class, hours before he allegedly opened fire on other students.

“On the morning of Nov. 30, a teacher observed concerning drawings and written statements that have been detailed in media reports, which the teacher reported to school counselors and the Dean of students,” Thorne wrote in a letter over the weekend. “The student was immediately removed from the classroom and brought to the guidance counselor’s office where he claimed the drawing was part of a video game he was designing and informed counselors that he planned to pursue video game design as a career.”

Thorne alleged that “at no time,” did school officials believe Crumbley may “harm others based on his behavior, responses, and demeanor” because the teen “appeared calm.”

“Despite media reports, whether or not the gun was in his backpack has not been confirmed by law enforcement to our knowledge nor by our investigation at this time,” said his letter.

Jennifer and James Crumbley were asked by Oxford High school officials to take their son home on that day but they “flatly refused” and went back to work, the letter stated. The school also told the two that they had 48 hours to find counseling for their son or officials could contact Child Protective Services, according to the letter.

Thorne’s letter further said that school authorities were not made aware of the family’s recent gun purchase, which was reportedly used in the shooting.

“While we understand this decision has caused anger, confusion and prompted understandable questioning, the counselors made a judgment based on their professional training and clinical experience and did not have all the facts we now know. Our counselors are deeply committed longstanding school members who have dedicated their lives to supporting students and addressing student mental health and behavioral issues,” his letter continued.

Crumbley has pleaded not guilty and is being held without bond. Jennifer and James Crumbley were apprehended on Saturday in Detroit after a police manhunt when they didn’t show up for their arraignment on Friday. A lawyer for the pair previously told local media that they were out of town because they feared for their safety.

Prosecutors said that the charges against the teen’s parents “are meant to hold the individuals who contributed to this tragedy accountable and also send a message that gun owners have a responsibility” and added that “when they fail to uphold that responsibility, there are serious and criminal consequences.”