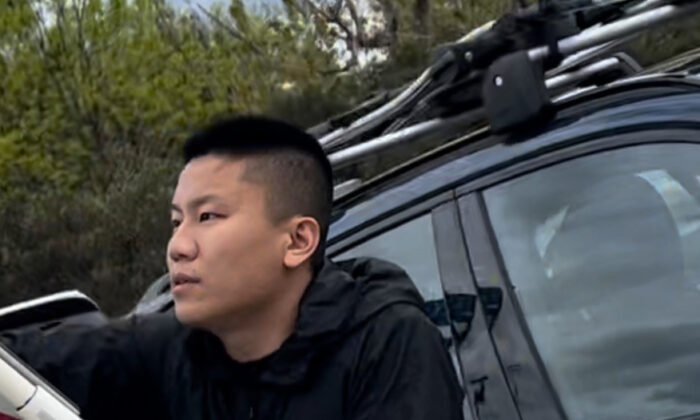 Police are seeking to identify three people involved in the incident. (Image supplied by ACT Police)
By Cindy Zhan

Cindy Zhan
Cindy Zhan is a reporter based in Australia. She covers national news with a focus on China-related issues. Got a tip? Contact her at cindy.zhan@epochtimes.com.au
View profile
biggersmaller
Print

Australian police have arrested a 30-year-old man in connection with an assault on protestors against the Chinese Communist Party (CCP) in Canberra, Australia.

Kang Zhao, who was arrested by Australian authorities on Dec. 5 at Sydney Airport as he sought to leave the country, appeared via audio-visual link in the ACT Magistrates Court today on Dec. 7.

Special Magistrate Margaret Hunter presided over the court. Zhao was charged with assault causing actual bodily harm and robbery over an incident in Acton in October, in which he is alleged to have assaulted Canberran human rights and anti-CCP advocate and damaged her mobile phone.

William Chan, Zhao’s lawyer, said his client would not be entering any plea or applying for bail, The Canberra Times reported.

“We’re not ready yet; we understand the defendant is an illegal immigrant at the moment,” said Chan, who also appeared via video link from Sydney.

ACT Police expect to apply for a criminal justice visa on Zhao’s behalf.

Zhao, who was remanded in custody, is scheduled to face court again in Canberra on Dec. 19.

The alleged assault occurred at the same time a group of Falun Gong advocates was running a human rights rally to raise awareness of the CCP’s persecution of the group in China at the Floriade flower festival in Canberra, Australia’s capital.

Falun Gong, also known as Falun Dafa, is a spiritual group consisting of meditative exercises and moral teachings centred on truthfulness, compassion, and tolerance. It is a Buddhist meditation practice that has been persecuted in mainland China since 1999.

Nancy Dong, the human rights advocate and CCP critic who was allegedly attacked by Zhao, told The Epoch Times she had returned to her car and found two Chinese men graffitiing the Chinese signage on her car that read, “End the evil CCP.”

Dong began to record the two men with her phone before one of them snatched it and proceeded to assault her.

“This young man then grabbed my neck with his elbow, lifted me up, and threw me to the ground. He then started to kick and punch me. I almost fainted from the fall, and I lost the ability to resist his attack,” Dong alleged.

The alleged altercation led to bruises on Dong’s arms and injuries to her lower body that forced her to require the use of crutches to be mobile.

While the two men spray-painted Dong’s car, a woman is also alleged to have played lookout for them. The police have released pictures of the three and sought information about them.

Despite being a victim herself, Dong said she felt sorry for those who attacked her.

“These young people are about the same age as my child[ren],” she told The Epoch Times. “I feel so bad to see that the CCP has educated young people to be so vicious and brutal.”

The matter remains under investigation by police. Anyone who has any information that can assist police is urged to contact Crime Stoppers at 1800 333 000 or on the Crime Stoppers ACT website. Please quote reference 7234672. Information can be provided anonymously.

The incident comes amid a growing wave of activism against the Chinese regime, which has seen protests against the CCP pop up in China and abroad.

In Sydney, over 100 protesters from all different backgrounds, ethnicities and political views came together, citing a sense of duty they felt to speak for their brothers and sisters back in China who do not enjoy the same extent of freedom to speak their minds.

Shouting slogans like “Xi Jinping, step down, CCP, step down,” the protesters rallied in front of Sydney’s Town Hall to decry the Chinese Communist Party (CCP) and its leader Xi Jinping on Saturday night as those concerned about China’s lack of freedoms and human rights gathered to remember the tragedies unfolding over the last three years in China under the far-left CCP’s so-called “zero-COVID” virus elimination policies.

One of the protest organisers, an international student from Shanghai, Laura Nguyen, who was supported by the socialist group Solidarity, said that people gathered at the rally were “different on the political spectrum.”

“Yet, we’re standing here for the same reason: human rights, freedom, and democracy,” she said.

Another young feminist activist, who goes by the alias “Horror Zoo” for safety reasons, told The Epoch Times that she and her friends were attending the rally to call for freedom and democracy.

“Even though the CCP has already lifted the lockdown restrictions, lots of protesters and activists are still in prison, and the CCP is still in power. And so I feel I have the responsibility to come here and speak for the Chinese people who don’t have freedom, don’t have democracy,” she said.

She said that the mass backlash against the CCP’s rule in China in recent weeks reveals that “the CCP is very evil.”

“The CCP is a dictatorship; they only care about their power; they want to lock the people in their homes. When we see that the rest of the world has already learned to live with COVID-19, but China still keeps this policy, this means that this is not for protection from COVID; this policy is for restricting people, for locking people in a cage. This is the CCP,” she said.

The protests also follow a wave of people signing online withdrawals from the CCP and its affiliated resignations, with over 400 million Chinese people quitting the CCP and signing on to the “End CCP” movement for people outside mainland China to show their support.

Mel Sun contributed to this report.