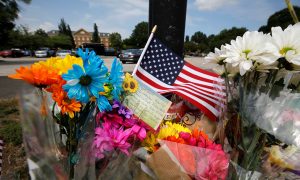 Suspect in Killing of Pitcher’s Family Placed on Suicide Watch

The wife, child, and mother-in-law of a pitcher in the Tampa Bay Rays organization were killed in Virginia earlier this week, and police arrested their brother. Later, he was placed on suicide watch.

Matthew Thomas Bernard, 18, was arrested on three counts of first-degree murder, officials said in a statement.

According to police, Bernard carried out the killings in Pittsylvania County. After the incident, WSET video footage appears to show Bernard running naked from the home past an area where reporters were filming.

Later, the suspect is seen grabbing a groundskeeper before trying to choke him. At one point, the suspect runs after a responding officer who then uses pepper spray on him.

Eventually, police stopped macing him and hit him with a baton, according to the footage.

Sheriff Mike Taylor said there no clear motive in the killings. He added that Bernard is on suicide watch.

Tonight’s doubleheader has been cancelled. pic.twitter.com/QjhbQ0unPP

“I know that you all have forgiven Matthew because he wasn’t aware of what he done. Mental illness unfortunately is very alive and I’m sorry it had to strike our family so hard but I will always love you all, including Matthew with all of my heart because I know the real him!” family member Jenn Stallard said on Facebook, according to WSET.

#UPDATE on Pittsco. Triple homicide. The neighbor who called police filed a criminal complaint saying Benard came to her home punched her, left and she then heard multiple gun shotsz she went next door and found a body in the driveway. pic.twitter.com/FZ1LQcDTyb

Stallard, meanwhile, told the Daily Mail that he was “suffering with mental illness and came to a breaking point. Matthew is my cousin and I will love him and be there for him if I am ever able to because what the public has seen was not him at all and as a family, we would never imagine this could have happened.”

The Montgomery Biscuits canceled its scheduled doubleheader Tuesday after news of the slayings broke.

In a statement on Twitter, the Rays wrote, “We’re with you, Blake.”

Happy 1st Birthday to my little man! Daddy loves you!

Meanwhile, Bernard is being held without bail and faces three counts of first-degree murder and use of a firearm during a felony, according to court documents. An initial court appearance is scheduled for Thursday morning. It wasn’t immediate clear if he had an attorney who could comment.

Paperwork for determining Bernard’s bail shows that he was attending community college and working at his parents’ campground.