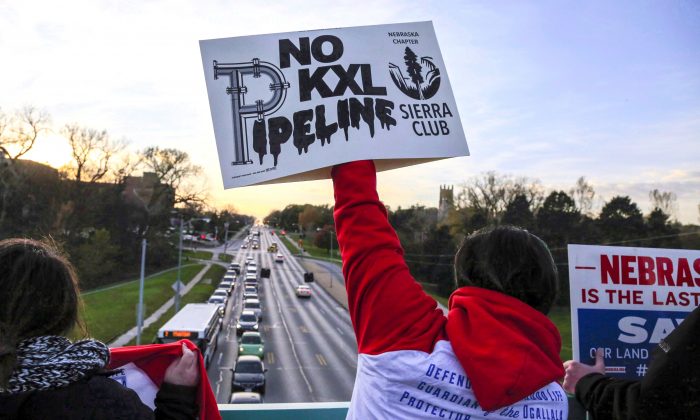 Opponents of the Keystone XL pipeline demonstrate on a pedestrian bridge during rush hour in Omaha, Nebraska, on Nov. 1, 2017. The pipeline was cancelled by U.S. President Joe Biden immediately after taking office in January 2021. (The Canadian Press/AP, Nati Harnik)
Canada

In 2016, a foreign-based organization financed by foreign-based foundations claimed the anti-pipeline campaign it co-ordinated “played a role in helping to unseat the Conservative Party in Alberta and nationally.”

This finding was among the examples of political activism by environmental groups revealed in the Alberta government’s inquiry into campaigns against the province’s energy sector, released on Oct. 21.

Conducted by forensic accountant Steve Allan, the inquiry found that the campaigns received direction and funding from foreign entities.

The 2016 claim about “unseating the Conservative Party” was made by the U.S.-based NGO Corporate Ethics International, now known as CorpEthics. The posting is no longer available on the organization’s website, but can be found using internet archiving services to look at previous versions of the page.

The posting describes the Tar Sands Campaign launched in 2008 as a strategy to “land-lock the tar sands so their crude could not reach the international market where it could fetch a high price per barrel. This meant national and grassroots organizing to block all proposed pipelines.” It said the strategy has been “successful to this day,” with all proposed pipelines in Canada having been blocked.

The Epoch Times contacted CorpEthics for comment but didn’t hear back.

Allan’s report outlines that CorpEthics was the recipient of grants, with most noting in their descriptions that they were destined for the Tar Sands Campaign. The grants came in large part from two major U.S. foundations, the Rockefeller Brothers Fund (RBF) and the Tides Foundation.

Between the two, they granted CorpEthics US$3.13 million between 2007 and 2011, with funds destined for the Tar Sands Campaign or “organizing on dirty fuels.”

The Tides Foundation is described by non-profit Influence Watch as a “major center-left grantmaking organization and a major pass-through funder to numerous left-leaning nonprofits.” Its operating mechanism allows donors to remain anonymous while being allowed to direct money to their preferred causes using “donor advised funds.”

The RBF is one of the various funds held by the well-known Rockefeller family, which made its initial fortune in the oil industry. The foundation’s stated purpose is advancing “social change that contributes to a more just, sustainable, and peaceful world.”

In 2014, the RBF announced it was divesting from fossil fuels, citing the environment as one of its most “enduring commitments.” “The Fund’s exposure to coal and tar sands has been reduced to 0.04 percent of our total portfolio. (At the time of the RBF’s first comprehensive analysis of its exposure in April 2014, it was 1.6 percent),” its website says.

A review of the foundation’s latest available tax filings in 2019 shows it had investments in a number of companies in the oil sector and related industries.

The RBF’s portfolio is very diversified, with its single largest financial stake in corporate stocks being Microsoft at a value of $8.5 million in 2019.

DivestmentFacts.com, a project of the Independent Petroleum Association of America, wrote in 2020 that it had examined RBF’s divestment and “found out that despite RBF’s best efforts, the group still invests with the industry that made them rich in the first place.”

DivestmentFacts labelled the foundation’s divestment campaign as a “PR stunt to capitalize the family’s name without really making substantial changes.”

The Epoch Times reached out to RBF for comment but didn’t receive a reply.

The 2016 CorpEthics webpage on the Tar Sands Campaign states that “in 2008, two major U.S. foundations asked CorpEthics to recruit the groups, develop the strategy, create a coordinated campaign, and act as a re-granting agency for the North American Tar Sands Campaign.”

The Allan inquiry found two documents from 2008 that likely established the strategy to lead the campaign.

One was a PowerPoint presentation titled “The Tar Sands Campaign” jointly sponsored by RBF, CorpEthics, the National Resources Defence Council, and the Pembina Institute, with the latter being the only Canada-based entity.

The CorpEthics document states that the campaign is large and complex, with multiple actors and strategic tracks, and therefore needs a co-ordinating structure.

“While NGOs generally prefer a network structure that allows for maximum communication, and minimal centralized control, foundations investing most heavily in the campaign have a vested interest in exercising some control over the process,” the document says, as quoted in Allan’s report.

It is also stated that the co-ordinating structure “shall remain invisible to the outside and to the extent possible, staff will be ‘purchased’ from engaged organizations.”

According to the report, the strategy outlined in the documents advanced on five tracks: “stop/limit pipeline and refinery expansion; force tar sands water, toxics, and land reform; significantly reduce future demand for tar sands oil; leverage tar sands debate for policy victories in the U.S. and Canada; and generate unity around the fuels endgame.”

The tactics used are also detailed in the report and cover a range of activities, from targeting the financial community to direct action, from litigation to political activism.

On political activism, the CorpEthics document says the aim is to “enroll key decision makers while isolating opponents.”

“We will win this campaign when we recruit a critical mass of these decision makers to agree to slow down, cut-back, and eventually stop the flow of tar sands oil altogether,” it says.

The Allan inquiry also identified a number of Canadian organizations involved in what it calls anti-Alberta energy activities.

It said LeadNow, which runs campaigns on progressive issues like climate change, engages in activities to influence political outcomes and pressure entities involved in the oil industry.

LeadNow launched its “Vote Together” campaign in 2015 to defeat the Harper Conservatives. Its website notes that 25 out of 29 Liberal and NDP candidates it was backing in Conservative swing ridings won in the election that year.

A post-election summary of the campaign titled “Defeating Harper: Reflections on the Vote Together campaign,” says “it was an ambitious strategy and for a first time effort, it paid off well.”

The Allan report says the Tides Foundation gave a grant of $86,751 to LeadNow in 2014 for “research, education and organizing on dirty fuels and pipelines.” It is unknown if any of those funds were used to unseat the Conservatives. A request for comment sent to LeadNow was unanswered as of press time.

The ultimate goal of the Tar Sands Campaign “was always to landlock Alberta’s oil and gas,” said Alberta Energy Minister Sonya Savage when releasing the inquiry’s report on Oct. 21.

“We saw it play out step by step and it continues today. Divestment campaigns operating today have claimed to achieve over 1,000 divestments from fossil fuels, representing $8 trillion.”

Savage said U.S. President Joe Biden has pleaded for more OPEC oil to rescue his country from high fuel prices, but if “Canada could have provided Americans with a stable source of energy from a trusted friend and ally … we could have avoided this energy crisis.”

“Americans are looking for someone to blame for today’s skyrocketing energy prices. I know a few organizations in this report that they could thank for that,” she said.

The climate change objectives of the Canadian and U.S. federal governments also see affordability and energy independence take a back seat.

On his first day as president, Biden cancelled anew the Keystone XL pipeline, which his predecessor Donald Trump had authorized after Obama’s 2015 cancellation.