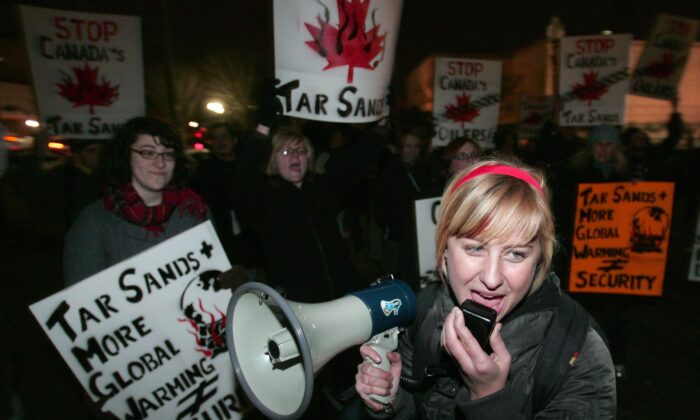 Environmental activists protest against Alberta oil outside the Canadian Embassy in Washington on Jan. 16, 2008. (Saul Loeb/AFP via Getty Images)
Viewpoints

The indifference being shown toward the conclusions of the public inquiry into anti-Alberta energy campaigns is nothing short of astonishing.

While the Allan inquiry found no legal wrongdoing on the part of environmental non-governmental organizations (ENGOs), it did expose a dismaying amount of foreign funding into those groups. Canadian-based environmental initiatives received an eye-popping $1.28 billion in foreign funding between 2003 and 2019. People should be very concerned about this.

The lack of transparency and accountability when it comes to ENGOs and their efforts to influence public policy and opinion is troubling.

It is recognized that expenditures on political campaigns will influence public opinion and shape national policies. Because of this, political parties are very heavily regulated with transparency requirements and spending limits. During the 2021 general election, political parties could only spend a maximum of $30 million each on their campaigns. It is illegal for political parties to accept any foreign funding as we don’t want other countries influencing Canadian public policy.

Meanwhile, ENGOs brought in a combined total of $80 million per year in foreign funding alone for their campaigns on top of their domestic fundraising.

Every single person who donates more than $200 to a political party has to have their name, address, and contribution amount publicly disclosed online. No one may donate more than $1,650 to any single party in a year. Can you imagine what would be discovered if ENGOs were held to that standard of transparency? Indeed, we can only imagine, as there is no way to find out exactly who has been donating to these organizations and how much.

ENGOs fought quite hard against the Allan inquiry in their activities. Environmental law firm Ecojustice launched a legal action to try and block the inquiry from happening at all. The challenge was dismissed in court in the spring by a provincial judge. Why would these groups go to such trouble to avoid scrutiny of their actions?

The inquiry, led by commissioner J. Stephens Allan, also exposed just how co-ordinated the foreign-funded Tar Sands Campaign is. The 2008 founding documents of the campaign indicated a plan to take a multi-pronged approach in opposition to Alberts’s oilsands operations, including the development of documentaries and research papers, divestment campaigns, direct action and citizen engagement, land conservation initiatives, litigation and political activism, and the achievement of legal precedents based on the rights of First Nations people.

According to the Tar Sands Campaign founding document: “The coordination center shall remain invisible to the outside.” Why such secrecy?

Canada has struggled over the last 15 years to get any major energy infrastructure projects started or completed. Co-ordinated opposition campaigns to pipelines have led to projects being mired in court challenges, delayed by well-funded protesters, and outright shut down by regulators. We can’t pretend the foreign dollars being poured into Canadian ENGOs did not play a part in these roadblocks to energy infrastructure development.

The Energy East pipeline project was regulated to death in 2017, when TransCanada Pipelines pulled out of the project. This led to a Central Canadian dependence on Enbridge Line 5 for its energy needs. The government of Michigan is trying to shut down Line 5, and it has the support of environmental groups on both sides of the border. If Line 5 is indeed shut down, the resulting energy shortage would be catastrophic. The actions of ENGOs in these matters are far from harmless. Canadian energy security is at risk.

While the foreign-funded actions of ENGOs may not be illegal, it doesn’t mean what they are doing is right. Free speech and expression are essential rights. These groups should be allowed to fundraise and lobby for their causes. However, they should also be bound by the same rules of disclosure and transparency that political parties are bound by. Canadians have a right to know just who is paying for the opposition efforts against our energy sector and what their interests are. The Allan inquiry only skimmed the surface of what is a large and convoluted yet well-organized effort to stymie conventional energy development within Canada.

Can you imagine the reaction Canadians would have if it was discovered that political parties were being given $80 million per year by foreign interests? We would be outraged.

We shouldn’t dismiss the conclusions of the Allan inquiry. We should be concerned about what it highlighted, and we should be looking much deeper.