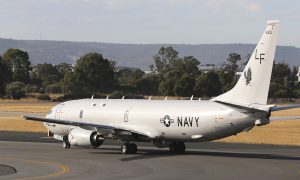 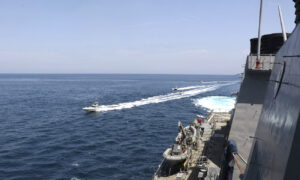 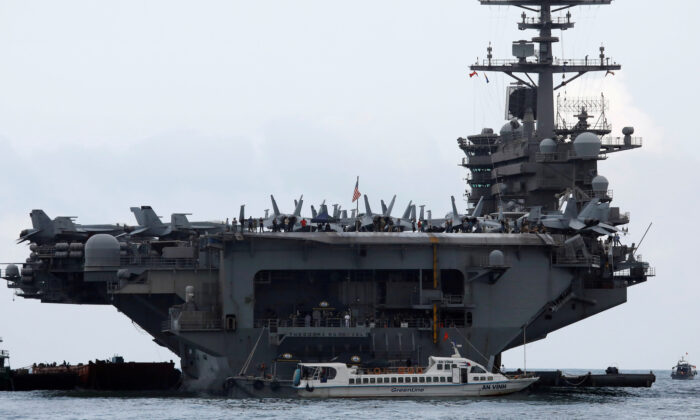 The USS Theodore Roosevelt (CVN-71) is seen while entering into the port in Da Nang, Vietnam, on March 5, 2020. (Kham/File Photo/Reuters)
US News

All Sailors on Stricken Carrier Now Tested for CCP Virus, Over 800 Positive

All of the crew on the virus-hit U.S. aircraft carrier have now been tested, with over 800 positive results, one month after the first case of CCP virus onboard was identified.

“As of today, 100 percent of USS Theodore Roosevelt (CVN 71) crewmembers have been tested for COVID-19, with 840 total positive and 4,098 negative results (a small number of results are still pending),” said an April 23 Navy statement.

The number of crew members hospitalized by the disease has dropped from nine to four, with no sailors in the ICU.

A sailor assigned to the virus-stricken aircraft carrier in the Pacific died on April 13 four days after being found unresponsive and being admitted to intensive care.

Chief Petty Officer Charles Robert Thacker Jr. was the first and so far the only active-duty member of the armed services to die from the CCP virus.

The USS Theodore Roosevelt is currently sidelined from its mission in the Pacific while the nuclear carrier is systematically evacuated and cleaned after an outbreak of COVID-19 on board.

A top U.S. general said on April 14 that all of the U.S. Navy’s 90 or so ships currently at sea are virus-free.

However, sailors assigned to 26 Navy ships in port have tested positive for the virus, Navy officials told news outlets on April 22.

Each of those ships has a “very small number of cases aboard,” the Navy said, according to The Hill, and sailors assigned to another 14 Navy vessels had tested positive but had since recovered.

Despite currently being temporarily sidelined in Guam due to an outbreak onboard, the Roosevelt could still quickly be deployed if needed, Gen. Mark Milley, chairman of the Joint Chiefs of Staff, previously told reporters.

Carrier groups are key players in the United States’ overseas power projection and the geopolitical tussle with China in the pacific.

To ensure that the Navy has at least two carriers at sea and ready to go at a moment’s notice, the USS Harry S. Truman carrier group is currently being kept at sea in the Atlantic despite finishing deployment—keeping the crew safe from the reaches of COVID-19 and ready for action.

“The ship is entering a period in which it needs to be ready to respond and deploy at any time,” Vice Adm. Andrew Lewis, commander of U.S. 2nd Fleet said in a statement on April 13. “Normally we can do that pierside, but in the face of COVID-19, we need to protect our most valuable asset, our people, by keeping the ship out to sea.”

The Navy is currently investigating how the outbreak began on the USS Theodore Roosevelt.

Many have pointed to a now-controversial port call in Vietnam.

However, Navy officials have told media outlets that they have not found conclusive evidence of a link between the outbreak and that port call. The outbreak began 15 days after the carrier left the port in Vietnam. The virus is thought to have a 14-day incubation period.

Navy officials are now considering the possibility that the virus came aboard through the regular supply deliveries to plane, known as carrier onboard deliveries (CODs) from the Philippines or Japan.

Officials said the first cases were among members of the carrier’s air wing, according to The Wall Street Journal.