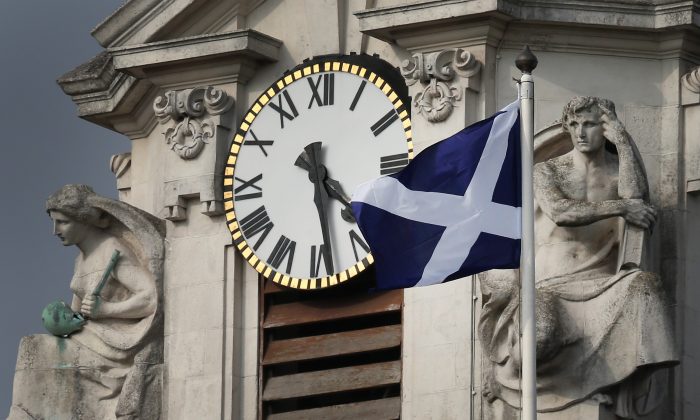 A Scottish Saltire flag flies over Lambeth Town Hall on Sept. 10, 2014, in London, England. English councils and national government buildings have been asked to fly the national flag of Scotland. Scottish voters will take part in a referendum on Sept. 18, 2014, to decide on independence. (Peter Macdiarmid/Getty Images)
Business & Economy

Financial markets became a lot more uncertain with a number of risk factors coming to the fore and the U.S. dollar benefitting over the observation period. Economic data took a backseat as major central banks’ actions and the possibility of Scotland’s independence from the U.K. captured the headlines.

The negative effects of geopolitical tensions on the major economies in the eurozone likely forced Draghi’s hand as he more than lived up to his Jackson Hole speech. The euro plummeted two cents, as Draghi would have liked, and reached its lowest level in a year (Sept. 8 close of 1.2895). A lower euro makes eurozone exports more competitive and can stimulate economic growth.

Further details of the asset purchase programs (buying asset-backed securities and covered bonds) will be revealed in October, but with skepticism about the size of the purchases as well as reluctance from the German and French governments, the ECB could be pushing on a string.

At this stage, the ECB has done just about everything it can (short of buying sovereign debt) and needs cooperation from the euro area governments.

But now, the new “tail risk” that has emerged is Scotland’s potential independence. With independence votes gaining and making the Sept. 18 referendum too close to call, the pound sterling took a nosedive of roughly 1.5 percent, reaching a 10-month low of just over 1.61.

While the Bank of England will likely be the first of the major central banks to raise rates, the fall in sterling was softened, but the bigger risk is an independent Scotland, the questions that raises, and knock-on effects in regions such as Spain’s Catalonia, which faces its own referendum.

Draghi’s “whatever it takes” speech in July 2012 was aimed at keeping the eurozone intact. However, a small probability of breakup has now been priced in, with Spanish bonds underperforming noticeably during the observation period.

Spanish 10-year yields moved higher by 0.2 percent. Granted, this move is not the kind seen during the height of the eurozone sovereign debt crisis, but it is notable given the low absolute level of 2.26 percent.

European stock markets got an initial boost from Draghi’s announcement, but have since pared back those gains on uncertainty surrounding these renewed breakup fears.

Last Friday’s U.S. non-farm payrolls figure of 142k (the lowest of 2014) would have had a more meaningful impact on monetary policy had it happened earlier in the year. Instead, that day, the S&P 500 rallied to close at an all-time high of 2,007.7.

What’s driving bond yields higher in the U.S. is anticipation of a more “hawkish” Fed at next week’s meeting (expectations for interest rates to rise sooner and faster). A run of strong economic data and more hawkish forces within the Fed will look past the non-farm payrolls print.

Canadian employment fell by 11,000, led by a record drop in private-sector jobs. This was a blow to Canada’s economic recovery, and as a result Canadian bonds outperformed U.S. bonds (yields did not rise as much). The TSX underperformed U.S. stock markets.

A paper by the Federal Reserve Bank of San Francisco discussing how complacent investors might underestimate the rise in interest rates once it gets started also drove bond yields higher. It also gave the U.S. dollar strength at the expense of the sterling, yen, and Australian dollar.

The Canadian dollar has held its own against the U.S. dollar, relatively speaking.

A stronger U.S. dollar represents a tightening of financial condition, which, all else equal, acts as an obstacle to economic growth. U.S. monetary policy is moving in the opposite direction from that of the ECB and Bank of Japan.

The U.S. dollar index is up 2 percent, with its very sharp move higher in September reflecting the contrast in monetary policies. However, the surge also becomes a somewhat new concern for the Federal Open Market Committee.

Rahul Vaidyanath is a Chartered Financial Analyst (CFA) with 15 years of capital markets experience. He has worked in the Financial Markets Department at the Bank of Canada as Principal Trader, Foreign Reserves Management. He has also worked as a mortgage bond trader in the U.S. Follow him on Twitter @RV_ETBiz