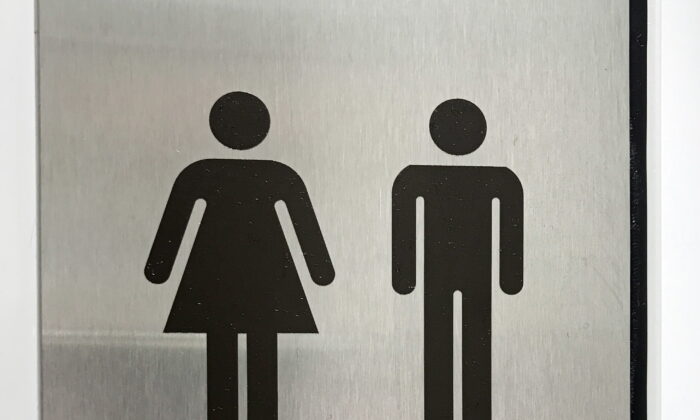 Kemi Badenoch said that is is "vital that women feel safe and comfortable when using public facilities." (Martin Keene/PA)
UK

All Public Buildings Must Have Separate Male and Female Toilets, Announces British Government

The government has announced a rule that all new public buildings must have mandatory separate male and female toilets, calling it a “common sense approach.”

The Department for Levelling Up, Housing, and Communities said that this will mean women, who may need to use facilities more often for example because of pregnancy and sanitary needs, have appropriate facilities.

Britain’s move is a sharp contrast to that of U.S. President Joe Biden who is using the full force of the state to promote gender ideology.

Last year Biden signed an executive order tasking the government with redefining all its policies and regulations regarding discrimination based on sex to include “gender identity,” which would mean men who identify themselves as women can’t be excluded from using all services and amenities reserved for women.

The British move follows a call for evidence that gathered a wide range of views, including from pregnant women, older people, disabled people, and people who come under the protected characteristic of gender reassignment.

In the UK, gender-neutral facilities mean men and women share the same space for waiting and hand wash facilities. Unisex, or universal, toilets are dedicated, self-contained toilets which maintain privacy for the single user.

Minister for Equalities Kemi Badenoch MP said it “is vital that women feel safe and comfortable when using public facilities, and that their needs are respected.”

“These changes will ensure that separate toilets for men and women are preserved at the same time as providing universal toilets for those that want them. This is a common-sense approach,” she added.

Campaign groups such as Fair Play for Women provided evidence to the government arguing that the trend to replace male-only/female-only spaces when premises are built or refurbished with gender-neutral toilets places women at “a significant disadvantage.”

“Proper single-sex toilet provision enables girls to attend school, and facilitates the participation of women in public life. In some cases, for example in rural India, it contributes to the basic safety of women, reducing their risk of assault, rape, and murder,” it wrote.

Also providing evidence, Safe Schools Alliance UK said that for “reasons of safety, privacy & dignity,” toilets in schools should be separated on the basis of sex. It said that it “is quite clear that ‘gender neutral’ in fact means ‘mixed-sex,’ which presents safeguarding issues for both women and children.”

“The rise in ‘gender neutral’ toilets raised safety concerns from women who feel they are losing privacy and being unfairly disadvantaged,” wrote the British government.

“Separate unisex (or universal) toilets should be provided if there is space, but should not come at the expense of female toilets,” it added.