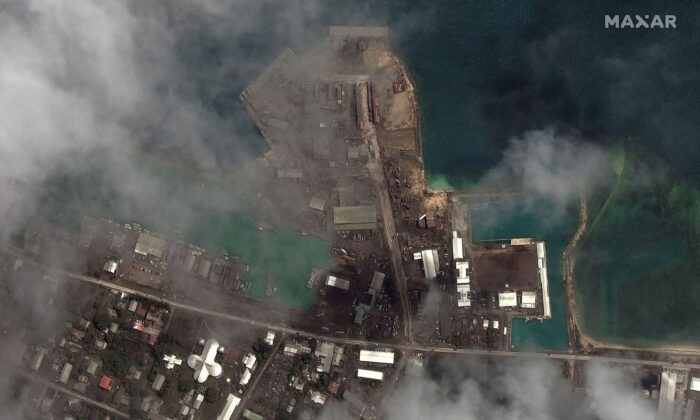 The main port facilities after the main eruption of the Hunga Tonga-Hunga Ha'apai volcano, in Nuku'alofa, Tonga, on Jan. 18, 2022. (Satellite Image ©2022 Maxar Technologies/Handout via Reuters)
International

All Homes on One of Tonga’s Islands Destroyed, Three Dead

SYDNEY/WELLINGTON—All the homes on one of Tonga’s small outer islands were destroyed in the massive volcanic eruption and tsunami, with three people so far confirmed dead, the government said on Tuesday in its first update since the disaster hit.

With communications severely hampered by an undersea cable being severed, information on the scale of the devastation after Saturday’s eruption, causing waves up to 15 metres high, has so far mostly come from reconnaissance aircraft.

But the office of Prime Minister Siaosi Sovaleni said in a statement that every home on Mango island, where around 50 people live, had been destroyed, only two houses remained on Fonoifua, and Namuka island had suffered extensive damage.

Tonga’s deputy head of mission in Australia, Curtis Tu’ihalangingie, earlier said pictures taken by the New Zealand Defence Force (NZDF) showed “alarming” scenes of a village destroyed on Mango and buildings missing on Atata island, which is closest to the volcano.

“People panic, people run and get injuries. Possibly there will be more deaths and we just pray that is not the case,” Tu’ihalangingie told Reuters.

Sovaleni’s office said a 65-year-old woman on Mango Island and a 49-year-old man on Nomuka Island had been killed, in addition to a British national whose death was confirmed on Monday. A number of injuries were also reported.

The United Nations said on Monday a distress signal was detected in the outlying Ha’apai islands, where Mango is located.

Tsunami waves reaching up to 15 metres had hit the Ha’apia island group and the west coast of Tonga’s main island, Tongatapu, the prime minister’s office said. On the western coast of the main island, 56 houses were completely or seriously damaged and residents moved to evacuation centres.

Mango is about 70 km (43 miles) from the Hunga Tonga-Hunga Ha’apai volcano, which sent tsunami waves across the Pacific Ocean when it erupted with a blast heard 2,300 km (1,430 miles) away in New Zealand.

A search and rescue operation began on Sunday for Atata island, which has a population of about 100 people.

“Challenges to sea and air transportation remain due to damage sustained by the wharves and the ash that is covering the runways,” it said.

The office said some limited communications had been made with satellite phones, but some areas remained cut off.

The Tongan navy had deployed with health teams and water, food and tents to the Ha’apai islands, with more aid, sent on Tuesday due to the severity of the damage observed on Mango, Fonoifua and Namuka islands, it said.

The NZDF images, which were posted on a Facebook site and confirmed by Tu’ihalangingie, showed tarpaulins being used as shelter on Mango island.

Tonga is expected to issue formal requests for aid soon but in the meantime, New Zealand said two ships, HMNZS Wellington and HMNZS Aotearoa, had set off with water supplies, survey teams and a helicopter.

By Kirsty Needham and Praveen Menon