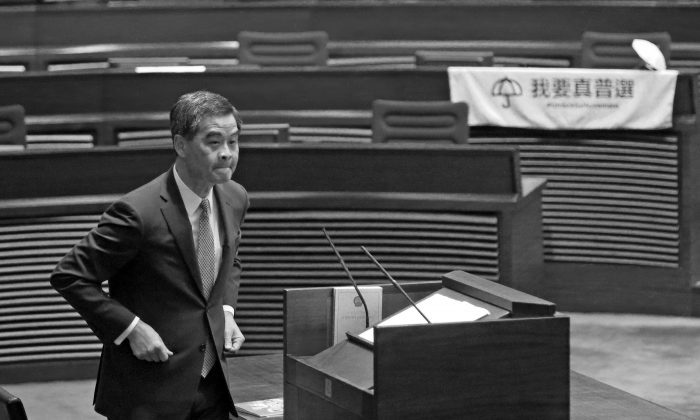 The Hong Kong leader made few fans after his annual policy address on Wednesday because he failed to adequately address a host of key residents’ concerns—housing, education, and the youth—but he did inspire about a dozen Hongkongers to hold a “Support CY Leung” march Saturday evening on Sai Yeung Choi Street in Mong Kok.

According to the event organizer, the police were notified of the march and approved of it, especially after the group stressed that they wouldn’t bring any Umbrella Movement paraphernalia—yellow umbrellas and “I want genuine universal suffrage” banners—or shout “Shopping Revolution” slogans—”Gau wu,” or “I want to shop.”

Instead, the group waved the Chinese communist regime’s flag or draped it over their shoulders. Some even wore Cultural Revolution-style Red Guard caps and brandished former Chinese leader Mao Zedong’s “Little Red Book.”

The marchers held aloft a picture of Leung with the words, “Chairman Leung is the Red Sun in our hearts,” current Chinese leader Xi Jinping’s photo, and a selection Cultural Revolution posters.

Towards the end of the march, however, the group trampling on the Communist flags, and shredded them.

Now a brief sit-down protest. One of the cops is trying sooooo hard not to laugh. #occupyHK #UmbrellaRevolution #9Wu pic.twitter.com/mFWjyitaPL

But why has Leung been given the full Chinese Communist Party treatment?

First, Leung did roll out a range of policies on Wednesday that would further integrate the semiautonomous city with mainland China. He also continued to back the Standing Committee of the National People’s Congress’ (NPCSC) controversial June white paper—Hong Kong’s “high degree of autonomy” is determined by Beijing—and the Aug. 31 decision—Hongkongers will have a “free vote” for the 2017 Chief Executive elections, but Beijing retains the final say. Both NPCSC rulings angered Hongkongers and triggered the 79-day long pro-democracy street protests in 2014.

“Ambitious and fond of starting struggles; are you trying to become Hong Kong’s Mao Zedong?” Lee shot out at a bemused-looking Leung.

A day after Lee made his comments, Leung’s Beijing “pal” further sealed his reputation as a Red.

Chen Changzhi, the vice-chairman of the NPCSC, allegedly said that backing Leung is the same as supporting the central government during a closed-door meeting in Shenzhen on Friday, according to local media South China Morning Post and Radio Television Hong Kong.

Leung hasn’t commented on Chen’s show of support or the faux “Chairman Leung” march, and probably never will.

But a recently set up spoof “CY Leung” Twitter account took the chance to thank his “loyal supporters” for “paint(ing) the town red.”

Wish to thank my loyal supporters currently gathered in Mong Kok. Paint the town red. Not with blood though. Not yet. pic.twitter.com/Q9rvObzKK2