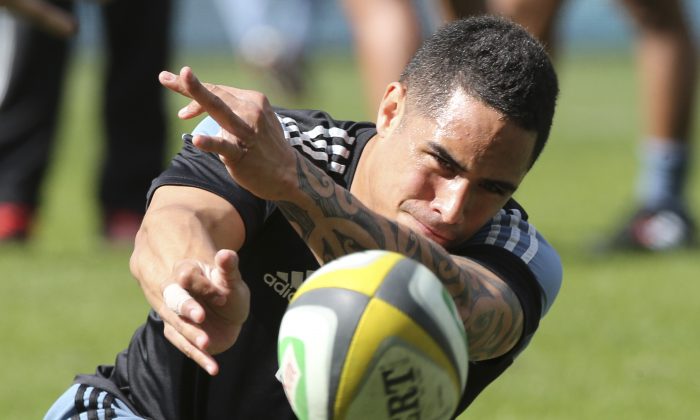 All Blacks' rugby player Aaron Smith passes the ball during the captains run in Sydney, Australia, Friday, Aug. 15, 2014. The All Blacks and the Wallabies will contest the Bledisloe Cup at Sydney Olmpic Park, Saturday, Aug. 16, 2014.(AP Photo/Rob Griffith)
Asia & Pacific

It’s Australia vs New Zealand in the Bledisloe Cup on Saturday.

The match will be broadcast on Fox Sports in Australia, Prime in New Zealand, SuperSport in South Africa, and Sky Sports 4 in the United Kingdom.

Live streaming will be available through all broadcasters.

Steve Hansen, the All Blacks coach, told the Independent that he expects the Wallabies to try and run the All Blacks off the park but indicated by putting Ben Smith at full-back in place of Israel Dagg that the ability to run the ball rather than put boot to leather is key to his game plan.

The All Blacks will be without star out-half Dan Carter, who is injured.

Wallabies coach Ewen McKenzie has revamped his lineup, but also said that the bench players will be key.

“I’ve always been a big advocate of ‘starters’ and ‘finishers’ and I’m confident we have guys on the bench who can come into the game and make an impact,” McKenzie said in an article posted on the team’s website.

“A lot of tries are scored in those final 20 minutes and we’ve seen over the years just how clinical the All Blacks can be at that stage of the game. We need guys who can withstand the pressure in those moments and also create opportunities for us as well.