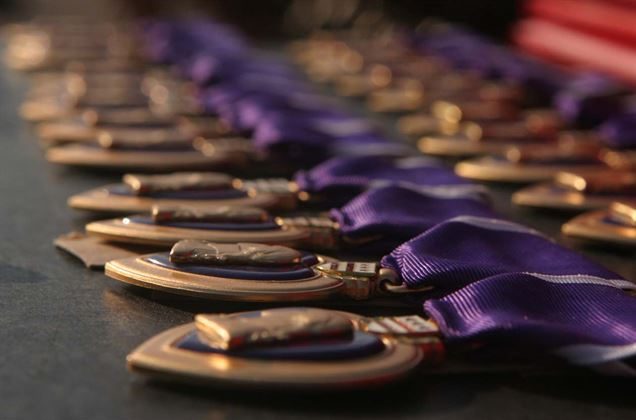 All 13 U.S. service members who were killed on Aug. 26 during the U.S.-led evacuation mission at the Kabul airport in Afghanistan have been posthumously awarded the Purple Heart.

The Navy announced on Tuesday that a sailor killed in the incident was awarded the Purple Heart, along with the 12 other service members.

As a result of his brave actions in support of his fellow service members, Navy Corpsman Maxton Soviak, 22, of Berlin Heights, Ohio, was promoted to the rank of hospital corpsman third class, and in addition to the Purple Heart was also awarded the Fleet Marine Force Corpsman warfare badge. He was assigned to the 1st Marine Regiment, 1st Marine Division.

“Petty Officer Soviak gave the ultimate sacrifice in service to this country,” said The Honorable Carlos Del Toro, Secretary of the Navy in a statement.

“While this promotion and the Fleet Marine Force Corpsman warfare badge are awarded posthumously, I have no doubt his dedication to this nation, his displayed skill as a Hospital Corpsman, and devotion to the mission at hand warrant this recognition.”

The 13 soldiers were killed during the U.S.-led evacuation mission at the Kabul airport in Afghanistan. They were helping to screen people at the Abbey Gate of the airport as thousands of Americans, Afghans, and other foreign nationals attempted to flee Afghanistan after the Taliban extremist group took over Kabul in mid-August.

Terrorist group ISIS-K claimed responsibility for the attack, which also claimed the lives of more than 160 Afghans, as they struggled to get into the airport and on flights out of the country.

The Biden administration has drawn significant condemnation from a number of veterans, Republican lawmakers, and even members of his own Party over how he handled the pullout.

On Thursday morning, the body of Army Staff Sgt. Ryan Knauss was returned to East Tennessee, two weeks after his death.

His body landed at McGhee Tyson Airport around 10:30 a.m. and was transported in a procession of local law enforcement to Mynatt Funeral Home.

Dozens of family members and locals lined the streets to show their support for the fallen soldier, many of them waving flags.

A public memorial service will be held on Saturday, Sept. 11 at 5 p.m. at the Gibbs High School football stadium—the school which  Knaus attended—for the soldier.