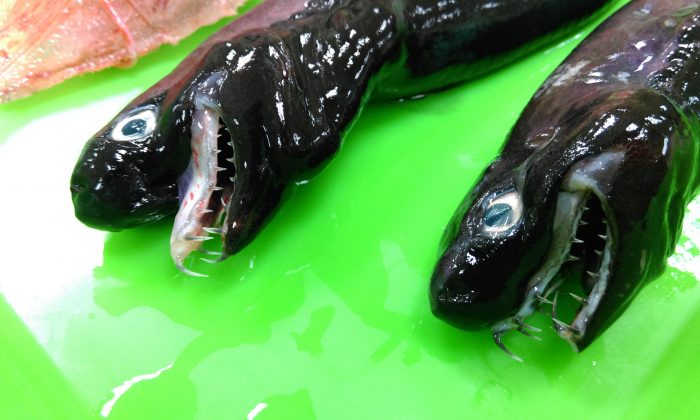 Five sharks of a terrifying appearance have been fished out near Taiwan’s east coast, Taiwan Fisheries Institute reported on Dec. 26.

The sharks are about 10-12 inches long and sport alien-like extendable jaws. They belong to the species Trigonognathus kabeyai, also known as viper shark.

The creatures are very rare. Scientists first got a look at one in 1986 and 1987 after a Japanese fishing boat, Seiryo-Maru, caught two immature male specimens off southern Japan.

Taiwan Fisheries Institute caught five of the sharks with gill nets at the depth of about 1,150 feet off the coast of Donghe Township, Taitung County, during a routine survey of fish fauna in the area. Four of them were dead. The lone survivor was placed in cold seawater, but died within a day.

“The most obvious feature of this species is the needle-like teeth that look like snake fangs, which is where the name viper shark originates from,” the institute stated.

The shark’s upper and lower jaws can extend forward to catch prey. It also has glowing belly, a common feature among the 45 species of so-called lantern sharks.

Viper sharks only live in waters near Japan, Taiwan, and Hawaii, the institute wrote.

The sharks were described as a new species in 1988 in a paper by Kenji Mochizuki and Fumio Ohe from the University of Tokyo, Aichi Prefecture Education Center. The specific name “kabeyai” is a tribute to Hiromichi Kabeya, the captain of the Seiryo-Maru.

There are still many mysteries left in the depths of oceans, which remain mostly unexplored.

Some of the deep ocean’s more exotic species include the Goblin shark, the Cookiecutter shark, and the Frilled shark.