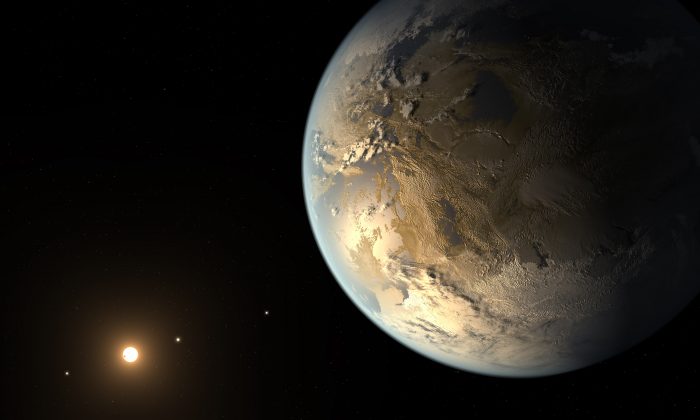 Artist's concept of a rocky Earth-sized planet in the habitable zone of its host star, possibly compatible with known data for Kepler-186f planet discovered in 2014 by the Kepler telescope. (NASA/SETI/JPL)
Science

Are there aliens living among us? Unfortunately, we’re not giving you an answer to this one. But are there aliens at all? Here the answer’s getting increasingly clear.

Scientists have been trying to give at least theoretical answers for over half a century. In 1961, American astronomer and astrophysicist Frank Drake created an equation attempting to estimate how likely it is for aliens to live in the Milky Way galaxy and be able to communicate with us.

He came up with a broad range from 20 million to 50 million alien civilizations.

Yet using his equation to come up with a specific number has been criticized, since the equation includes parameters such as how long can a developed civilization last—something scientists can only guess.

In 1964, Stephen Dole, at the time head of the human engineering group at the Rand Corporation, summarized a less ambitious question: How many planets are there in the Milky Way that can support life?

He also put together an equation and came up with some 35 million.

Then in 2008, Claudio Maccone, astronomer and mathematician with the Search for Extra Terrestrial Life Institute, fit another piece into the puzzle.

He decided to turn Drake’s and later Dole’s equations into a set of probabilities. Grossly simplified, the principle is similar to what pollsters are using. They not only give you a number, but also a plus or minus range representing the margin of error.

For example, a 2005 Gallup poll showed some 24 percent of Americans believed aliens have visited Earth—plus or minus 3 percent.

Maccone’s calculations estimated 100 million habitable planets and 10,000 with civilizations. The only problem: The first calculation had a margin of error of plus or minus 200 million.

So, let’s just get back to square one.

In 1995, astronomers detected for the first time a planet orbiting another star. Of course, it was nothing like Earth. More like Jupiter—made mostly of gases.

By 1999, scientists discovered about 20 planets. At least one could have liquid water, which meant, at least theoretically, some kind of life could be recognized. A microbe, for example. It was, however, about 70 times the size of Earth.

In 2007, astronomers found another planet just the right distance from its star to have liquid water. It was only about 50 percent bigger than Earth—the smallest planet discovered.

“On the treasure map of the universe, one would be tempted to mark this planet with an X,” said Xavier Delfosse of Grenoble University in France, according to Space.com.

But let’s not celebrate just yet. Several years later multiple scientists argued there was an error in measurement and the planet doesn’t exist at all.

Their arguments came with better detection techniques brought by the Kepler telescope launched in 2009. Its sole mission is to stare at some 150,000 stars trying to spot them dimming a bit when their planets cross between the star and the telescope.

By January 2015 the telescope discovered about 1,000 planets. Eight of them should have liquid water and about 50 more are on a candidates’ list to be in the “habitable zone” as well.

If the rest of the galaxy looks like the tiny piece of space observed by Kepler, scientists estimated almost 9 billion Earth-size, potentially habitable planets in the Milky Way.

Suddenly, alien life in the universe looks much more likely, doesn’t it?