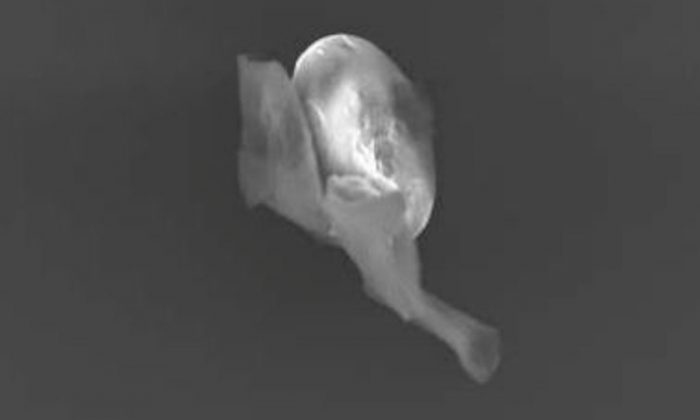 Four biological entities isolated from the stratosphere by University of Sheffield researchers. (Screenshot/Journal of Cosmology)
Life Beyond Earth

A sampling device launched into the Earth’s stratosphere by U.K. researchers in July has come back with what they say is evidence of alien life transported on comets.

Articles about alien life published in the journal have come into question by at least one scientist.

Author, astronomist, and skeptic Phil Plait criticized a previous article in the journal about life found on a meteorite. “If there’s a story practically guaranteed to go viral, it’s about evidence of life in space. And if you have pictures, why, that’s going to spread like, well, like a virus,” he wrote in Slate.

The Journal of Cosmology’s editor-in-chief is Rudolf Schild, Ph.D., of the Center for Astrophysics, Harvard-Smithsonian. The journal’s website states that every article is peer reviewed by “at least two recognized experts who specialize in the topic under consideration.”

The recent study, led by Dr. Milton Wainwright, states that the most convincing evidence of alien life found in the sampling device is filaments that are high in carbon and oxygen.

The microfilaments’ structure is similar to spore-bearing structures seen in fungi.

Closely intermingled with these three entities is a fourth, which is “highly reminiscent of a red rain cell.”

Red rain cells have also been the subject of a controversial study claiming evidence of alien life.