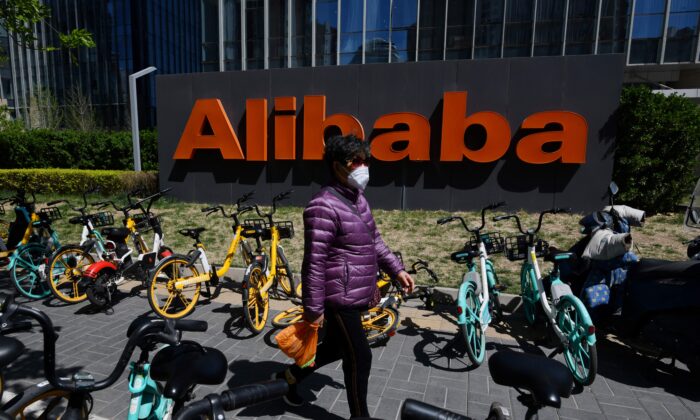 A woman walks past an Alibaba sign outside the company's office in Beijing on April 13, 2021. (Greg Baker/AFP via Getty Images)
China Business & Economy

Tech conglomerate Tencent’s shares are up 1.7 percent to about $63.40.

Hong Kong’s benchmark Hang Seng Index slipped into negative territory after opening higher on Monday and was down almost 0.4 percent at the time of writing. The index closed 0.3 percent higher on Friday, extending gains to a fourth straight session.

Why Is It Moving?

The Hang Seng Index drifted lower despite the release of Chinese economic data that came in better than expected. Property stocks fell on liquidity concerns.

Investors also remained cautious as they looked ahead to the virtual meeting between U.S. President Joe Biden and Chinese leader Xi Jinping later in the day. The meeting is the first between the two leaders since Biden assumed office.

Data released Monday showed that China retail sales in October rose 4.9 percent year-over-year, while industrial output for the month grew 3.5 percent from a year ago despite the impact of widespread COVID-19 outbreaks and supply shortages.

Meanwhile, new home prices in China fell for the second straight month in October, edging down 0.25 percent from the previous month, MarketWatch reported.

Property developer Sunac China Holdings Limited raised about $953 million through the sale of new shares and the sale of a stake in its property management unit, Bloomberg reported. The fundraising raised concerns about potential debt defaults by China’s largest property firms.

Shares of Chinese companies closed mostly higher in U.S. trading on Friday after the major averages in the United States closed in positive territory.