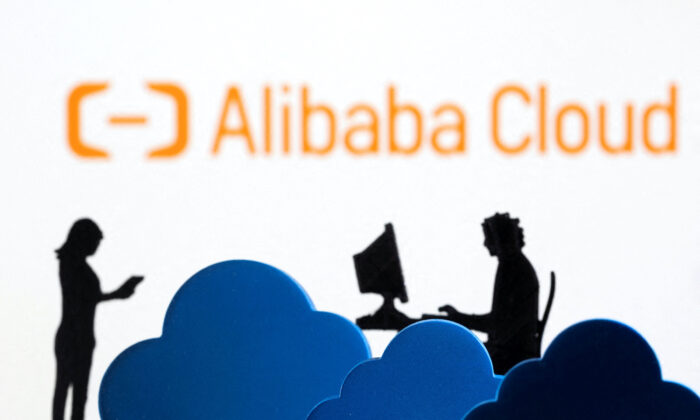 3D printed clouds and figurines are seen in front of the Alibaba Cloud service logo in this illustration taken on Feb. 8, 2022. (Dado Ruvic/Reuters)
China Business & Economy

SHANGHAI—Shares in Alibaba Group fell the most in a month on Friday, after the Wall Street Journal reported that the Chinese tech giant’s cloud division has been summoned by Shanghai authorities in connection with a theft of police data.

An anonymous hacker had earlier this month claimed to have obtained personal information of more than 1 billion Chinese residents from the Shanghai police.

A dashboard for managing the database was left open on the internet for over a year without a password, which made it easy to access and retrieve its contents, the Wall Street Journal said, citing cybersecurity researchers.

Based on scans of the police database, the researchers said the data was hosted on Alibaba’s cloud platform, which temporarily disabled access to the breached database and launched an inspection since the theft was discovered, the report said.

The report, citing sources familiar with the matter, also said that Shanghai authorities had summoned executives from the company’s cloud division in relation to the data.

The Shanghai authorities and spokespersons for Alibaba as well as its cloud division did not immediately respond to Reuters requests for comment. Chinese authorities have yet to confirm the breach occurred.

Alibaba’s share price on Friday fell as much as 5.98 percent, marking the biggest daily percentage drop since June 13.

The stock is on track to end the week down 15.3 percent, its biggest weekly percent drop since its Hong Kong market debut in November 2019.

The company’s U.S. listed shares had closed down 3.6 percent on Thursday.

Brock Silvers, chief investment officer at Kaiyuan Capital in Hong Kong, says that if Alibaba indeed was connected to the alleged breach, it would be “at the mercy of Beijing’s regulators.”

“New business could be impaired until this matter is cleared. Even when it is cleared, there is potential for substantial fines,” he said.

Alibaba’s cloud division, the country’s largest player by market share, has come under regulatory fire before. In December, China’s industry ministry suspended a cooperative agreement with Alibaba Cloud over accusations it failed to promptly report and address a cybersecurity vulnerability.

Some local Chinese authorities have sought to move their data away from privately-owned cloud systems. Last year, Reuters reported citing a document that the Chinese city of Tianjin ordered municipality-controlled companies to migrate all their data to a state-backed cloud system.